Charleston Hartfield died yesterday, at 34 years old. He was an off-duty Las Vegas police officer, gunned down by a madman in Las Vegas, one of 59 people murdered for no reason.

As well as being a son, a husband and a father, Hartfield was a military veteran. But there will be no outrage expressed by Republican politicians who typically fetishize U.S. war veterans.  There will be none of the anger these people displayed when football players protested racism and police brutality by kneeling during the national anthem.

More than 500 Americans were injured in the Las Vegas massacre. Most are still being treated in hospitals. In America, the victim’s medical care is not a “right” but a privilege. The person who brought 20 guns including military-style assault weapons into a Las Vegas hotel – he has “rights.”

Nevada law does not require firearms owners to have licenses or register their weapons, nor does it limit the number of firearms an individual posses. Automatic assault weapons and machine guns are also legal in the state.

President Trump and the NRA-controlled congress offer prayers, but not even a single proposal, nevermind solutions, to stop the insane gun violence in America.

Who killed Charleston Hartfield? Who saw him die? Who caught his blood? Who’ll make the shroud? Who’ll dig his grave?

“I,” said the National Rifle Association.  Shares of gunmakers jumped more than 3% on Monday after the massacre. 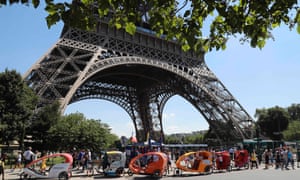 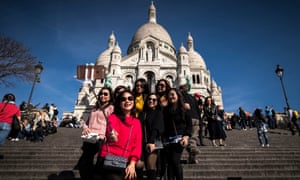 On a warm August day, the world’s most famous boulevard, the Champs-Elysées, is heaving.Li-na and Zhangli from Shanghai, laden with bags from designer stores, are here to go shopping, while James from Illinois wants to climb the Arc de Triomphe.“I’ve already done the Eiffel Tower, Sacré Coeur and Notre Dame,” he says.

“Tomorrow it’s Versailles.” Bernard, from neighbouring Belgium, is in the French capital for a short break “because it’s beautiful and not far by train”.In the tree-lined street’s grand flagship stores and myriad eateries you can almost hear the collective sigh of relief: after a “catastrophic” 2016 for tourism following a series of terrorist attacks in France, the visitors are back – and in record numbers [ . . . ]

With the motives of the Champs-Elysées gunman considered terror-related, the timing just three days before the first round of the French presidential elections and during a prime time TV “debate” between all 11 official candidates clearly suggests that extremists are seeking to influence the tone of the debate – and perhaps its outcome [ . . . ]

More at source: How Champs Elysees attack could swing the French presidential election

French President François Hollande hit back at Donald Trump with a dig about gun control Saturday, a day after the new US president attacked France’s immigration policies and Paris.”I don’t want to make a comparison, but there are no weapons circulating here, there are no people who take weapons to shoot into a crowd,” the Socialist president said, in a reference to the tighter gun control measures in France than in the US.”It is never good to show the slightest mistrust towards a friendly country. That is not what you do towards an ally and I ask the American president not to do that to France,” Hollande said at the opening of the high-profile annual agricultural fair in Paris [ . . . ]