The Pompidou Centre in Paris hosts the ‘Mai 68 Assemblée Générale’ happening to mark the 50th anniversary of May 68 in France. The event runs until 20 May.

In May-June 1968 massive student protests and strikes across France nearly brought down President Charles de Gaulle and his government.

May 68 posters and slogans

Graphist artist Philippe Lakits will reinterpret the slogans and posters of May 68 in a 60 metre long frieze designed for the event.

The May 68 slogans have had a powerful impact in a France without newspapers, radio or television, which were all on strike at the time.

Most of the May 68 posters were produced in the Ateliers populaires (People’s Workshops) that art and graphic design students will try to revive in the Pompidou Centre Forum.

According to the event organiser Romain Lacroix, the main May 68 topics on the posters are nowadays ‘somehow irrelevant:

Feminism was hardly touched on, now it’s much more to the fore. Ecology was also neglected, even if the Larzac became an issue… these are issues that are of interest to the younger generation.

Besides the picture frieze, debates and conferences will take place in a mobile lecture hall designed by Olivier Vadrot.

Georges Pompidou and May 68

The Pompidou Centre has a specific link to May 68.

Georges Pompidou, who was General de Gaulle’s prime minister at the time, managed the crisis while he was bringing it to political closure.

In 1969 after being elected president, Pompidou decided to to have an arts centre built which opened ten years later in 1977.

We can see clearly how it’s a question of how to make protest part of the museum. It’s due to the fact that the first artists whose works were shown at the Pompidou Centre in 1977 were those demonstrating on the streets in 68.  [ . . . ]

Fifty years after the transformative May ’68 student-led protests in France, universities and cultural institutions across the country are presenting diverse programs and events that revisit the spirit of the ’60s in all of its facets, from revolution to social activism and more. Check back here periodically for an updated listing of events. 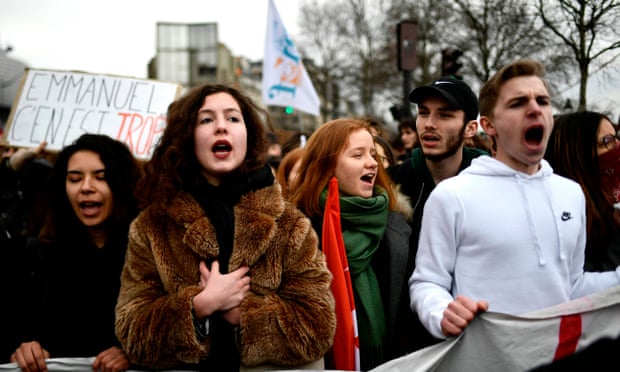 President Macron faces his biggest challenge as strikes and protests recall the epic struggle that rocked France to its core. We can win, insist this generation…

At Nanterre university, on the outskirts of Paris, militant students have a dilemma: how can they pass their end-of-year exams while simultaneously fighting to derail the French government’s education reforms?

“It’s a worry, but we’ll find a way,” says Annaël Lombe, a student union leader who is taking his political science finals in a few weeks. “Exams or not, we won’t stop the protest. We will carry on the action.”

Fifty years ago, Nanterre students issued much the same warning. It turned out to be far from an idle threat. Subsequent protests at Nanterre sparked the May 1968 civil unrest that drew 10 million students and striking workers on to the streets and brought France to a halt. It was a dramatic – some thought revolutionary –moment in French history that nearly toppled a government.

In the end, the protests fizzled out, but even now the events remain a model of how people power can rattle French political leaders and in doing so change society.[ . . . ]

READ FULL STORY at: THE GUARDIAN The spirit of 1968 rises again: can French students and workers triumph? | World news | The Guardian