Hooded, black-clad demonstrators clashed with police in Paris on Saturday as thousands of people joined traditional May Day protests across France to demand social and economic justice and voice their opposition to government plans to change unemployment benefits.

Police made 46 arrests in the capital, where garbage bins were set on fire and the windows of a bank branch were smashed, momentarily delaying the march.

More than 106,000 people marched throughout France, including 17,000 in Paris, according to the Interior Ministry.

Trade unionists were joined by members of the “Yellow Vest” movement, which triggered a wave of anti-government protests three years ago, and by workers from sectors hit hard by pandemic restrictions such as culture. [ . . . ]

Source: Arrests in Paris as thousands join May Day protests across France | Reuters

French President Emmanuel Macron has called for a compromise between his government and unions over plans to change the pension system that have led to sustained strikes — including from Paris Opera musicians who staged a street concert in rebellion.

PARIS – French President Emmanuel Macron has called for a compromise between his government and unions over plans to change the pension system that have led to sustained strikes — including from Paris Opera musicians who staged a street concert in rebellion.

In a spirited, makeshift performance, Paris Opera musicians played excerpts Tuesday from “Carmen” and “Romeo and Juliet” on the front steps of the Opera Bastille, which served as a dramatic reminder of the rocky start to 2020 that awaits Macron.

Tuesday marked the 27th consecutive day of transport strikes. The Versailles Palace, usually a huge tourist draw, said it was closed Tuesday because of strikes, too.

In his televised New Year’s address, Macron said the pension overhaul “will be carried out” but called on his government to “find the path of a quick compromise” as negotiations with unions resume in early January.

Seeking to ease tensions, he suggested people with painful work will be allowed early retirement.

Yet Macron stayed firm on the principles of the reform, including its most decried measure: raising the eligibility age for full pensions from 62 to 64. He insisted that the new system will be fairer and financially sustainable.

“My only compass is our country’s interest,” he said.

Musicians who have put down their instruments since open-ended strikes started Dec. 5 reveled in the chance to play for the crowd that gathered to hear them on Paris’ Place de la Bastille, the site of an infamous prison stormed by a revolutionary mob on July 14, 1789, and then demolished.

“We’re all at the bottom of a deep hole being unable to play since Dec. 5,” said violinist Emilie Belaud.

But, she added, orchestra members are determined to hold firm. The Paris Opera has had to cancel all its scheduled ballets and operas since Dec. 5 — 63 performances in all.

“If the government persists in being stubborn and refusing to negotiate in good conditions, we’ll carry on,” Belaud vowed.

The crowd chanted for the abandonment of the retirement overhaul. They also cried, “We’re united! General strike!”

Macron wants to unify France’s 42 different pension plans into a single one, giving all workers the same general rights. [ . . . ] 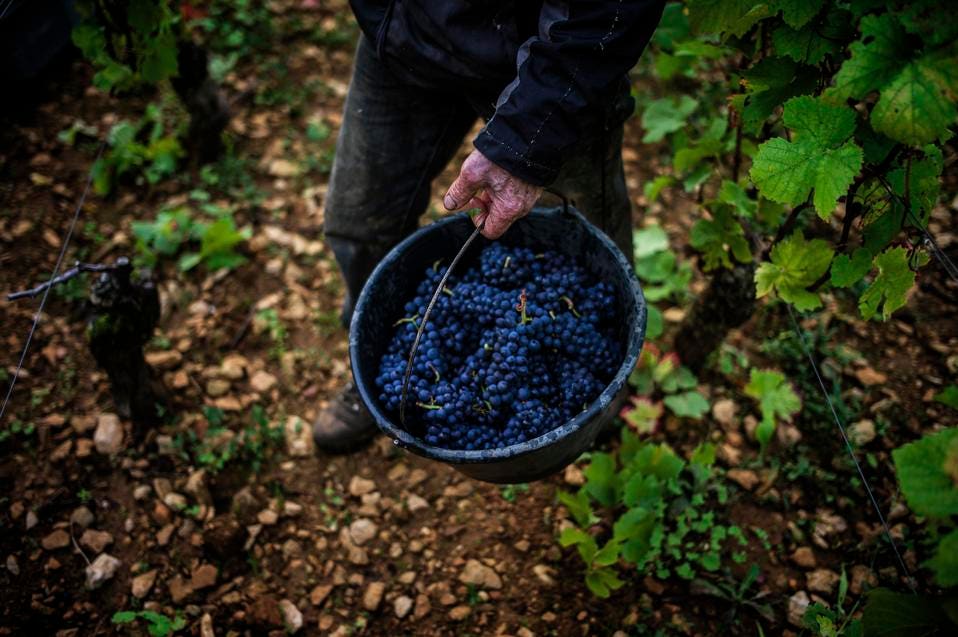 If working a wine grape harvest is on your bucket list, 2018 may be the year you realize the dream if you are eligible for employment in France. Due in part to an exceptionally hot summer in regions such as Jura and Alsace, the harvest date has crept up, leaving many growers in search of seasonal workers. As in other parts of the world, an agricultural labor shortage has become more common in recent years. In 2018, the early harvest in some parts of France has presented additional scheduling issues. Experienced pickers expect the work to begin a bit later in the year, and many of them are tied up with other jobs or are on leave.

Vineyard owners also say there seem to be fewer applicants as seasonal jobs appear less lucrative than in the past when some producers even held a waiting list for volunteers eager for the experience. Now some growers are prepared to provide bonuses, wine and small gifts to entice workers to choose their vineyards. Elise Bathelier is the human resources manager for Domaine Faiveley in Burgundy.

Employers realize the need to broadcast job openings via social media in addition to job fairs and personal networking. In late July, Alsace producer Domaine Allimant-Laugner posted on Facebook, “Harvest is approaching! Festivities launch on 8/24 or 8/27 with eight days of crémant harvest. Who wants to join our team?” Responses were met with personal messages regarding next steps. Soélis Défi, a provider of rural job matching services, has published an easy-to-use application form on Facebook.

The 2018 harvest in France is expected to produce a significant improvement on the yields of record-breakingly low 2017. According to July 2018 reports from the French Ministry of Agriculture, estimates are up double digits over last year. This is good news for the growers, but all those grapes must be picked at the perfect time.

Harvest is a flurry of urgent activity, with bands of laborers streaming down the rows with clippers. Harvested grapes are placed into bins that are carried or held on one’s back — when the bins are full they go into larger containers to be taken into the winery. This continues for days to weeks, depending on the size of the vineyard and the pattern of grapes being harvested. 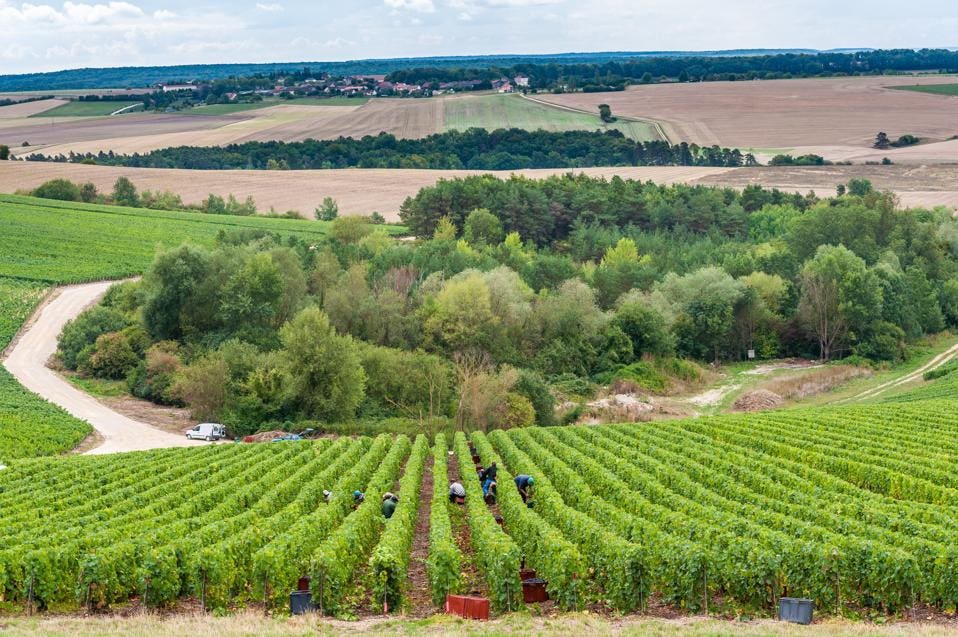 Because grapes are harvested when they are perfectly ripe, certain portions of a single vineyard could be picked in their own time. Having a mobile team of workers on hand makes this process much easier. As vineyards blush closer to that magic moment, growers hope that plenty of eligible people answer the call.

As demonstrations spread in France over the government’s university reforms and some students joined ranks with striking rail-workers, there is increased talk of whether France is heading for a repeat of ‘May 68’?

“May 68. They are commemorating, we are starting again”, reads a slogan recently tagged onto the statue at the iconic Place de la République square in central Paris, which is so often the hub where protesters and strikers gather.

The graffiti is not just wanton vandalism and could be a word of warning to the French government.

Nearly 50 years ago in May 1968, student protests over the education system flared up into nationwide confrontation and turned into one of the greatest upheaval in modern day France.

“Protesting and contesting are always a potential political option for youth people, and that’s a good thing for the vitality of our democracy,”

This week, student demonstrations over new tighter university admissions rules appeared to be headed in the same direction, as several hundred students in the universities of Lyon, Lille, Strasbourg and Bordeaux joined ranks with France’s railworkers as they staged a second day of strikes. [ . . . ]

More at: THE LOCAL As strikes and student protests mount, is France heading for a rerun of May 68? – The Local

PARIS CAN WAIT
Bonjour my friends!
Last night I watched the movie Paris Can Wait as a mindless diversion from Rachel Maddow’s frustratingly futile plans for a Trump impeachment and the continuous Harvey-Irma hurricane disaster reports. This cable news diversion was a bit more mindless than I could tolerate, however. Although I loved the many French restaurant dining scenes (particularly the Châteauneuf-du-Pape pouring into oversized wine glasses) and the footage of a curiously unoccupied Pont du Gard, I’ve seen better stories on The Hallmark Channel, watching with my 87 year old mother, while both of us drown-out the romcom dialogue with talk about our Red Sox. Mom loves Mookie.
This is the first feature film from Eleanor Coppola (the wife of Francis Ford Coppola) and the story is somewhat autobiographical, with lovely Diane Lane playing a recently empty-nested “Anne” (Coppola) who undertakes a surprise road trip from Cannes to Paris, alongside the flirtatious Frenchman Jacques (Arnaud Viard), who is a business associate of her husband (Alec Baldwin as the Francis Ford You-Know-Who character).
Will Jacques be nimble and quick enough to grab some nookie with Anne? After about 30 minutes you’ll stop caring about either of these graying cuties, and your only concern will be if the local wine shop is still open.

MACRON, LUMBERGH AND THE SLACKERS
Reuters News reports President Emmanuel Macron faces the first challenge on the streets to his business-friendly reform agenda today, when workers from the hard-left CGT union will march through French cities to protest against a loosening of labor regulations.  Macron told French business leaders: “I am fully determined and I won’t cede any ground, not to slackers, nor cynics, nor hardliners.”

My French friends – don’t fall for this shit! Ask any American worker if they would prefer your 35 hour work week and many holidays  to our 24/7/365 days-a-year model. Only the most jealous and/or deluded will claim ours is superior to yours in terms of overall health and happiness. Don’t allow Macron to become President Bill Lumbergh. You’ll be working Saturdays, mes amis.