Gypsy jazz ala Django in Uzès

It was so cool to run into this gypsy jazz quartet performing at Place aux Herbes, in Uzès last July. In this video recorded from my iPhone, the Uzès guys (never caught their name so let’s call them The Uzèsniacs ) are masterfully strumming “I Can’t Give You Anything But Love,” in that beautiful jazz manouche style.

Apologies -my cell battery sadly dies in the middle of a great guitar solo. Mert!

“I Can’t Give You Anything but Love” is an American jazz standard attributed to the Tin Pan Alley team of  Jimmy McHugh (music) and Dorothy Fields (lyrics) in 1928. Fats Waller and Una Mae Carlisle recorded my favorite version of the song, and there are jazz scholars who maintain that it was actually Waller who wrote the song and sold it to McHugh and Fields for $500. Mert, encore!

The song “I Can’t Give You Anything but Love” is also famously featured in the classic screwball comedy Bringing Up Baby (1938) with Katharine Hepburn and Cary Grant. The Uzèsniacs probably learned the song from this wonderful 1936 version from Django Reinhardt et le Quintette du Hot Club de France ( listen below)

Though overall, a disappointment – I’m glad I finally got to see Django, which just hit my local cable movie offerings. I’ll first ac-cent-uate the positive, and say actor Reta Kateb makes a dashing Django Reinhardt. I’ll add  that close-ups of Ketab’s guitar fingering is as impressive as … well, Sean Penn’s, anyway. I can forgive even the amount of fabrication in the screenplay. But, by the time Django with his gypsy bandmates and family are planning their escape from Nazi-occupied France in 1943, the movie just seems to run out of gas. (I’d say run out of heart, but the movie’s never has much of that to begin with.) The movie did make me pull out my Django recordings and listen to Minor Swing, Nuages, (the unofficial anthem of the French Resistance) and Sweet Georgia Brown. And that’s always a good thing.

Read the LA Times Review below:

In German-occupied France, guitarist Django Reinhardt (Reda Kateb) awakens to the horrors inflicted upon his people in this musically accomplished but “oversimplified, underfed and overburdened” film.

A bar fight breaks out during a pivotal scene in Django, the musically crisp yet mournful new wartime drama by Étienne Comar. As the fracas unfolds, the band keeps playing, with a blithe bemusement that seems to say: This happens all the time. But these are far from normal times.

The leader of the band is Django Reinhardt, the incomparably gifted Romani jazz guitarist, soulfully embodied by the French-Algerian actor Reda Kateb. He’s biding his time in the French Alps during German occupation, hoping for stealth passage across Lake Geneva into Switzerland. One of the men throwing punches is a Nazi solider, which means the inevitable: a lineup, a lockup and the sternest of warnings. Reinhardt is no good, it would seem, at laying low.

Kateb studied the guitar for a year to prepare for this role, and his work is evident: There’s an unstudied naturalism to the flicker of his fingers across the fretboard, and the film perks up whenever music is playing [ . . . ]

Read Full Review at: ‘Django’: Life — And Music — During Wartime 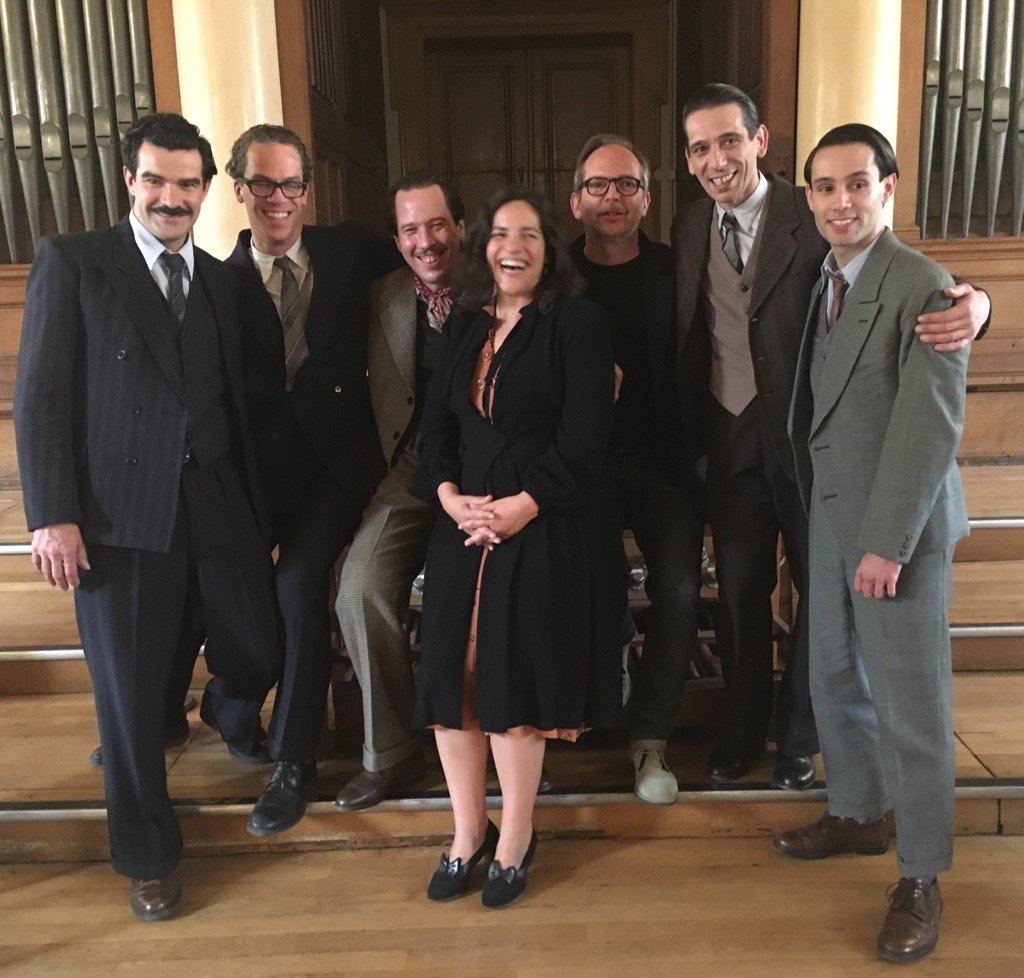 Birelli Legrene, at age 14, already a master of the jazz manouche style originated by Django Reinhardt