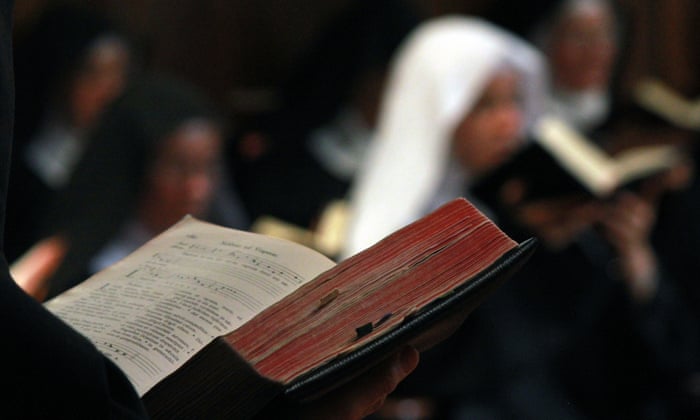 A monastery of Benedictine nuns living in seclusion in southern France has opened its doors to allow recordings of its Gregorian chants to be made available to the outside world.

In what is believed to be the largest recording project ever conducted, the US musician John Anderson followed the 45-strong order for three years. He installed microphones in the abbey church of Notre-Dame de Fidélité de Jouques near Aix-en-Provence in southern France and captured the nuns singing their eight daily “offices”. The result is thousands of chants, the entire Gregorian repertoire, about 7,000 hours long.

The Gregorian chant originated in the 8th century and spread throughout Europe. It accords to St Benedict’s “rule”, in which the day is divided into balanced divisions of manual and intellectual work, prayer and rest, starting at 5am with the chanting of matins, and concluding with compline at 8pm, followed by the “great silence” of night.

The Jouques nuns’ lead a strict life of contemplation in which they recite the chants daily.

The abbey, which has its own congregation, is closed for Easter as a result of rules applied to prevent the spread of the coronavirus. “Because of the measures taken … we can no longer admit worshippers to our abbey’s church, and we are deeply sorry for it,” the nuns said.

They have instead allowed the release of a week’s worth of their chants https://www.neumz.com/ for the six days Christians refer to as holy week, preceding Easter Sunday, the highlight of the religious calendar, when the chants have a particular importance. The rest is to go live next month.

Anderson was inspired by the Gregorian chants after an aunt joined the convent and he visited her during his summer holidays from university.

“The community is living in communion with nature and in quiet contemplation. Their life is regularised by the rhythm of prayer and work,” he said. “The simple beauty of their singing” had had a profound influence on him, he said, and “on the sensation of time, the amount of focus it was possible to achieve in such tranquillity”.

After negotiating with the nuns for a week, he and a sound technician suspended eight low-profile microphones in the church, which recorded into a small recorder that saved the music to SD cards.

The nuns pressed “record” every time they entered the church and “stop” when they exited after each service. A 4G modem was installed at the monastery, enabling the nuns to upload the 24GB of contents to the technicians’ Google Drive account every evening, from where the recordings were mixed and mastered.

Organised so as to be as minimally invasive to the nuns’ lives, the recordings of clear unaccompanied voices are speckled with authentic sounds such as the creak of wooden benches, the occasional coughing or dropping of prayer books and bell chimes.

Anderson, a founder of Odradek Records originally from Kansas but now living in Italy, said the launch of the project, which was eight years in the making and would raise money for the order’s sister monastery in Benin, west Africa, had come at the right time, when many people were detached from their work and social contacts.

“In these days of remote work and online social activity, we hope that listening to the chants of holy week can help bring people together, religious and non-, sharing in a sense of peace and enjoying their timeless beauty,” he said.

“The sisters live this paradox already – in isolation but in continuous prayer for the rest of the world, and in community amongst themselves. These days we are maybe experiencing a similar sensation, to be physically isolated but sometimes even closer together emotionally.”