Recipes for a small but still lavish holiday meal.

By Bill Buford | The Atlantic

Between 2008, when I moved with my family to Lyon, and 2013, when we moved back to New York, we celebrated Thanksgiving with a loose confederation of American acquaintances. Many were there because they had fallen in love with a French partner and settled in the city. Some had married people of other nationalities. For us, the city was an appealing mix of what seemed like everyone from everywhere, and no Thanksgiving ever felt simply American, except, possibly, the one we hosted. I had to order a bird well in advance (the French rarely eat turkey in November) and planned an unapologetically kitschy menu, including classics from childhood: marshmallows on sweet potatoes, canned cranberry sauce (which our son Frederick decided was the best food he had tasted in his life), and pumpkin pie made with Carnation condensed milk, bought at the nearby “American” bagel store (where you also found Coke in a bottle, Froot Loops, and Welch’s grape jelly). The pie troubled our French friends: a sweet tart confected from a savory ingredient? They were also uncomfortable with so much cinnamon, a spice that they mysteriously loathed to the point (in one case) of gagging. For many years, our son George didn’t understand why you would add cinnamon to anything.

Our other Thanksgivings never took place on the actual day (Thanksgiving, obviously, is not a French holiday, and on the Thursday in question people work). Our friends Victor (American) and Sylvie (French) hosted one on a Saturday night, buffet style, where French was the principal language spoken. My wife’s friend Bridget hosted another where she provided the turkey and asked guests to provide everything else. The evening was relaxed—no stress about traditions or obligatory dishes or family members in a low-blood sugar moment (although Frederick was disappointed not to have any jellied cranberry)—and featured some extravagant displays of exceptional French cooking. I have trouble remembering the exact dishes, though, because there was also an abundance of fine Beaujolais. (We drove to the dinner; we returned by public transport.) For my part, I arrived with three dishes instead of one, including pumpkin pie made with a butter pastry, a Port sauce for the turkey, and ingredients for whipping up buttery mashed potatoes in the style of the late, great chef Joël Robuchon. My wife has ridiculed me to this day—was I trying to show off? But I had got excited by what France had taught me about cooking, and by the challenge of applying it to traditional American fare. (And I was probably showing off.)

The menu for this year’s Thanksgiving is one I could imagine making if we were in France now, hosting friends. It is also informed by a longing to be there among them. Since leaving Lyon, we have returned to visit every year. This year we didn’t. Also, after we returned to the United States my mother died, and, for my sister and me, her death has changed how we observe Thanksgiving. Always a family holiday, at least theoretically, it is now a family extravaganza, celebrated with as many family members as possible, and with exuberant quantities of food and wine and game-playing and outright jubilation, as if to shout down our buried feelings of sorrow. This year, we, like many others, won’t be seeing those relatives. The menu I’ve devised is a lot for a family of four, and it is lavish (it includes a truffle!), because we’re celebrating nonetheless, and maybe, too, because we want to keep busy and make a lot of noise so that we don’t notice all the people who are not with us. I’ve made food for six, though, just in case a pair of cousins happen, against all odds, to drop by.

Cranberry is one of the great American flavors, and the sauce made from it is perfect with turkey. But it is also perfect with just about anything else you will cook this winter, including scallops, pork roast, even omelets. If kept from being too sweet (there is a tendency in most recipes to counter the fruit’s sharp, sour bite with an excess of sugar), the sauce has a brightness and a zing that are like nothing else you will find easily on a winter plate. It is also naturally gelatinous and surprisingly full in the mouth. It is just an outright happy sauce. Make it in abundance. Make it for now and later and for February. You can store it in containers in the freezer.

The French touch: a bottle of Banyuls and a fresh vanilla pod. Banyuls is one of the several fortified sweet wines that you find in southeastern France. The alcohol is high at 16.5 per cent, it costs fifteen to twenty dollars a bottle, and, like the cranberry, it has bright, zingy flavors. (The cook also found it to be a perfectly sound refreshment while finishing the turkey.) Vanilla is one of the fundamentals of the French palate, and not only in pastry; perhaps only the shallot is more pervasive.

1. Wash cranberries and toss with sugar. Add to a saucepan.
END_OF_DOCUMENT_TOKEN_TO_BE_REPLACED

The only thing better than a good recipe? When something’s so easy to make that you don’t even need one. Welcome to It’s That Simple, a column where we talk you through the process of making the dishes and drinks we can make with our eyes closed.

My parents are notorious cheese hoarders. There is never a time when I’m at their house and their cheese drawer isn’t overflowing with Havarti for my mom and a sharp Irish or Australian cheddar for my dad, plus whatever called their names at the grocery store that week.

Unfortunately I’ve inherited this trait. I can’t resist combing through any “just-enough” cheese bin and taking one or two home with me. But when a regular cheese-and-cracker combo isn’t hitting the spot anymore, or I have a leftover hunk from a recipe and I don’t know what to do with the rest, fromage fort is my savior. Quite literally meaning “strong cheese” in French, it is the divine combination of cheese, butter, and wine. Blended up with the allium or herbs of your choice, it becomes an impossibly addictive and infinitely adaptable spread, and though it feels posh, the only thing you need to make it is a food processor.

It requires about 8 oz. cheese, room temperature (you can always do more, but depending on the size of your food processor, you may have a hard time doing less). Part of the fun is figuring out which cheeses to play against each other. In general bluer, funkier, or saltier cheeses will have a more dominating flavor than milder cheeses, so use less of them if you want the flavors of any other cheeses to come through. Try balancing 1 or 2 oz. of your blue or funky cheese with 3 or 4 oz. of something mild and buttery, like Muenster or Gouda, and round out the rest with familiar fridge standbys like goat cheese, Parmesan, or cheddar. Grate any harder cheeses and cube or crumble softer cheeses. If you want to add garlic—and you do—give a clove a rough chop. END_OF_DOCUMENT_TOKEN_TO_BE_REPLACED

I was first introduced to tarte flambée, which comes from Alsace, with the explanation that it’s France’s answer to pizza. In fact, though, it’s not much like pizza at all 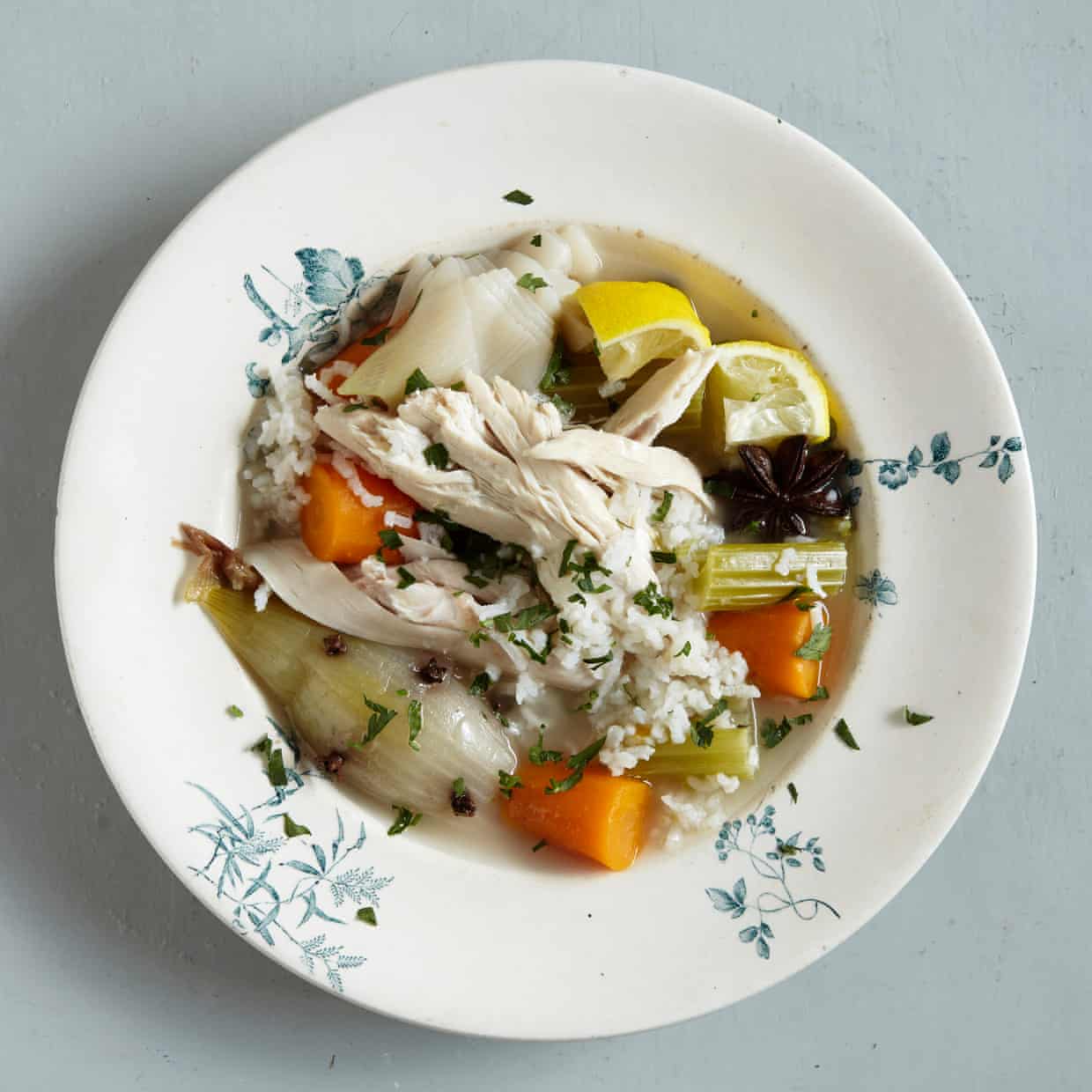 The story goes that France’s King Henry IV declared that every family in France should have the means to eat chicken every Sunday, and from this, the poule-au-pot was born.

Poule-au-pot is chicken simmered in water with vegetables and aromatics. The broth can either be served separately or with the chicken and vegetables. A spent hen – a chicken bred to lay eggs – is traditional for this dish. Tougher and more gamey-tasting than chicken bred for meat, such a hen would require a longer simmering time than is indicated below, at least two hours, to become tender. 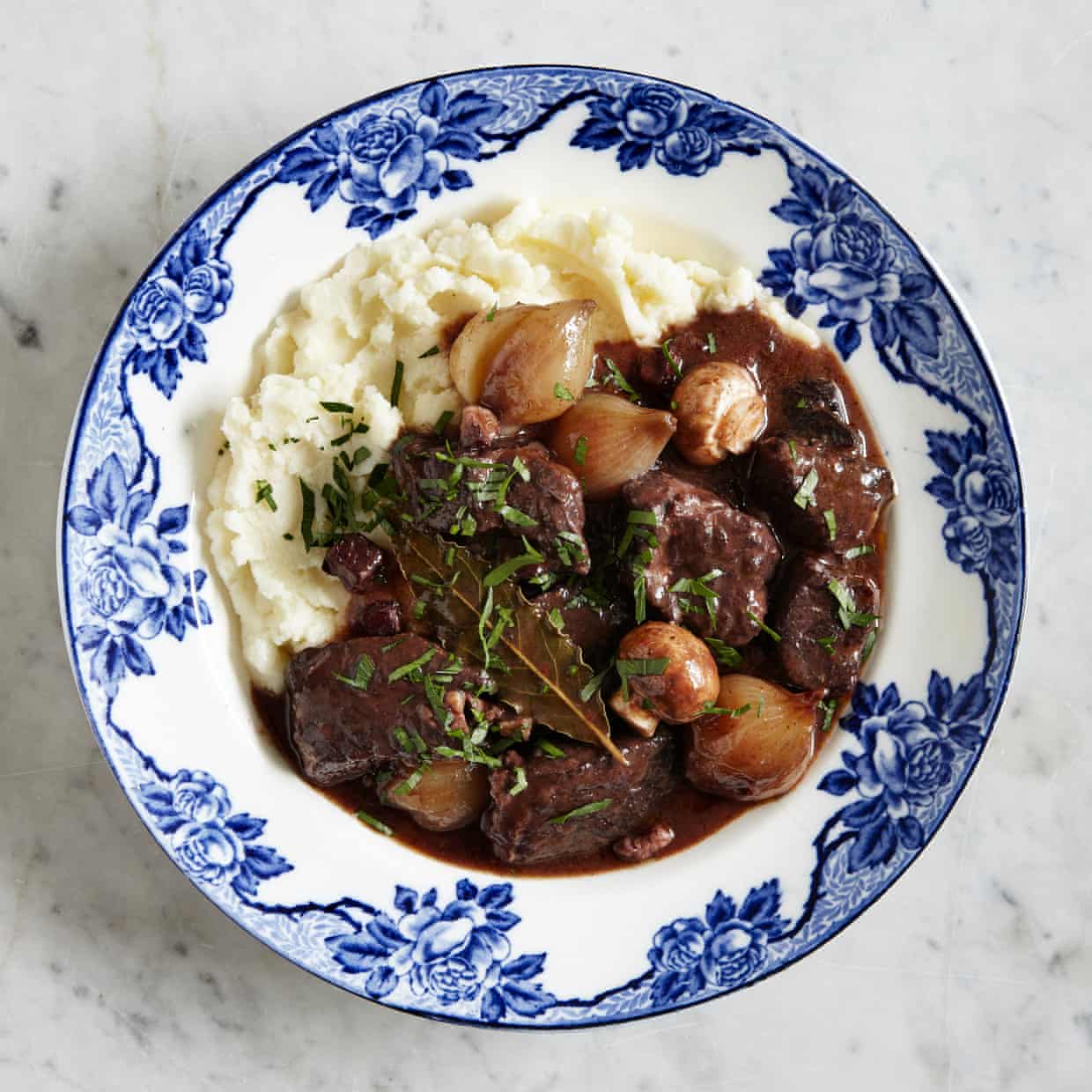 Heat the lard or oil in a large pan on a high flame and fry the meat until browned on all sides, then add the onions and fry until those are also browned.

Meanwhile, in another pan, sweat the bacon in some oil or lard for a few minutes [ . . . ]