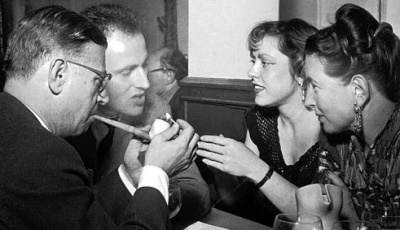 Been to Saint-Germain-des-Pres? Not only does it not exist, but it hardly even briefly existed. Just enough time to forge a media and historiographic myth called for sustainable profitability. This is the thesis supported by the historian Eric Dussault in The invention of Saint-Germain-des-Prés (247 pages, 22 euros, Vendémiaire), probable synthesis of a large-scale university work if we judge by the importance of the sources. He explains the phenomenon by the indifference of cultural historians and by the subordination of history to memory. Because if until 1960 the narration of the epic was well done by journalists, afterwards it concentrated exclusively in the mouth and under the nostalgic pen of actors and witnesses of the time who were authoritative by dint of being taken over. in loop for sixty years without the slightest critical perspective. They are Léo Larguier for his picturesque Saint-Germain-des-Prés, mon village , the Fargue of the unequaled  Pedestrian of Paris , Simone de Beauvoir memorialist ( La Force des choses) and Boris Vian, indispensable master of the premises and author of the Manuel de Saint-Germain-des-Prés guide  (written in 1950 but published in 1974).

Funny neighborhood. A great Parisian brand in itself. A French product that should be NF stamped (when you think that Les Deux Magots dares to proclaim itself on its menu “the meeting place of the intellectual elite” …). Administratively, it is delimited by the rue des Saint-Pères to the west, the quays of the Seine to the north, between the rue de Seine and the rue Mazarine to the east, and the rue du Four to the south, but some chroniclers le sometimes overflow so widely that it crosses the bridge to extend its empire a little on the right bank on the grounds that famous jazz clubs were there. Its rebirth in the modern era dates from the beginning of the 20th century with the concentration of publishing houses and its takeoff from the interwar period with the creation of literary prizes.

After going through all the testimonies, Eric Dussault says that the black presence there has been underestimated. When it is mentioned, it is only to evoke jazzmen; so much so that writer James Baldwin planned to publish a book called No, We Don’t Play the Trumpet. The musicians were certainly numerous and notable, but the other black artists and the African students even more. The author also insists on other absent from the official history of the district: drug addicts. Lovers of opium, ether and ortedrin.

The village in question knew all the same its golden age between 1945 and 1950, the apogee being situated according to the experts in 1947. The day after the Liberation, they took the word at face value. Saint-Germain, synonymous with non-conformism, was considered a place of debauchery, permissiveness, where the small and large bourgeois feared that their offspring would get lost in stupor, idleness, scandal, the easy life and love. illegal. Homosexuals met at the Fiacre rue du Recherches-Midi or at the Pergola at the corner of the rue du Four and the boulevard. The author makes a lot of police reports (General Information and Prefecture of Police) on the morals of Marcel Carné, Jean Genet, Jean Cocteau, Simone de Beauvoir, suspected of being dangerous inverts likely to involve young people. a masochist of a particular kind who would go so far as to collect used toilet paper, some of which would be bound in a luxurious red morocco blanket ” (another one who misread La Nausée). One wonders in what way the Germanopratins could well threaten the security of the State to the point of provoking such investigations, and one must agree with the author that this was essentially a question of an unhealthy curiosity of the leaders.

Several films have also done a lot for the construction of the myth: Les Tricheurs by Marcel Carné (what a soundtrack! Stan Getz, Roy Elridge, Coleman Hawkins Dizzy Gillespie, Oscar Peterson, Gus Johnson, Herb Ellis, Ray Brown…), Rendez- You of July by Jacques Becker (so authentic that it can also be seen as a documentary, but it is sure that the director was a true jazz lover) and to a lesser extent because little seen The lion signby Eric Rohmer. The handrail registers, also consulted by the researcher, testify not only to clandestine abortions but to a certain number of reports of adultery in the hotels of the district (what a time!). There was even a cell of the Communist Party, well known from within by the conflicting memories of its members (Jorge Semprun, Claude Roy, Marguerite Duras, the Antelme), bourgeois intellectuals who annexed a few janitors and two or three workers for serve as  “proletarian alibis”.

The paradox is interesting: if Saint-Germain is synonymous with cafes (Le Flore, Les Deux Magots, Bonaparte, Rhumerie later dear to the Hussars) and restaurants (Lipp in particular), it is its cellars that have made its legend. Because there have been bistros since the 18th century (the Procope) while the nightlife in cellars so humid that it was necessary to regularly dry the piano in the open air (the case at Tabou , rue Dauphine) c ‘was new. We sought after the fact to explain this craze for the underground (desire for marginality, the scent of wine, taste for home, etc.) when the reason was above all the availability of places and their ability to allow music to be made. hear late and loud without disturbing the neighbors.

Boris and Michèle Vian were the natural touts of these places. Their friendship, presence and support made the owner of a network even more secure than a gang. The case of the Lorientais , rue des Carmes, young and inexpensive, which owed its reputation to the quality of its music from 1946 to 1948 (the orchestra of Claude Luter who then emigrated to Kentucky ) but also of the Club Saint-Germain , rue Saint-Benoit, and the Vieux Colombier which could be proud of the association of clarinetist Claude Luter and saxophonist Sydney Bechet, not to mention La Rose rouge, rue de la Harpe then rue de Rennes. The point is that jazz and existentialism were the two pillars of the myth. As for the first, its aura would have been even more important if it had not been undermined by a quarrel between the Ancients and the Moderns, the former being led by Hugues Panassié, and the latter by Charles Delaunay, the musicians being the main ones. victims of this jazz war. Without forgetting another quarrel, more discreet, more hidden but no less lively, which opposed French jazzolaters who, on principle and by taste, swore only by black musicians, to those who reproached them for this form of reverse racism, of snobbery. and in bad faith ( Jazz Hot magazine )

As for the second, it is just as inseparable from the mythology of the neighborhood. The word “existentialism” appeared for the first time in the press on May 3, 1947 under the pen of Anne-Marie Cazalis, informal press attaché for the intellectual milieu of Saint-Germain-des-Prés, in the columns of Samedi- evening , the newspaper which, in the same momentum, launched the Tabou and, in the end, the district. All the media seized on it and it was no longer a question of the troglodytes dancing in caves ( “But existentialism is not a cellar, it is a mine!  ” Said a character from one of the films devoted to the “ambitious” of the district). A few months later, the American weekly Lifetook it all over several pages and assured Saint-Germain an international reputation that still lasts, even if today, the myth is no longer exploited except to serve luxury, clothes and food. But it doesn’t matter to us that the most expensive street in Paris, it seems (21,000 euros per m2) is the tiny rue de Furstemberg, or that the pint is at 11.50 euros at Les Deux Magots. We know that anyway, this is no longer where it happens, especially as publishers and not the least (Le Seuil, Plon, Flammarion …) have started to migrate to the outskirts without losing their soul. .

One thing still escaped me after having closed this book full of information, recognized sounds, recovered faces and still vivid traces: the author’s lack of empathy for his characters. Even if he did the work of a historian and not of a novelist, we were entitled to hope in the end of another fall than:

“So, Saint-Germain-des-Prés place of memory? Rather a Parisian microcosm among many others ”.

Ah good… All that for that? If Saint-Germain-desPrés is so unoriginal, if there is no more according to than before, what is the point of having deployed so much effort in research and analysis? We want to defend the subject against its author. It is all the more unfortunate that the researcher had the merit of excavating in an almost unexplored field. But we will be able to forgive someone who nevertheless had enough sensitivity to compare these extracts from two memorialists about their meeting:

Miles Davis  : “I had always been so wrapped up in a kind of trance that I had never devoted time to a love affair. Music had been my whole life until I met Juliette Greco (…) Juliette was probably the first woman I loved as a human being, on an equal footing. She didn’t speak English, I didn’t speak French. We spoke to each other with our eyes ”.

Juliette Gréco  : “I had never seen such a handsome man and I haven’t seen a more handsome one since (…) I was backstage and he was playing. I saw him in profile: an Egyptian god ”.

Their affair only lasted a few weeks, but it was so intense that it marked their lives. The photos of Jean-Philippe Charbonnier made her enter the legend of jazz and that of Saint-Germain-des-Prés. And believe me if you will but, while I was reading this passage in a subway car near “Bastille”, a clarinetist played (rather well, by the way) not his version of So what , all the same, but Little flower …

(“Sartre, Beauvoir and the Vians at the bistro” photo DR; “In the cellar” photo DR; “Juliette Greco and Miles Davis, 1949” photo Jean-Philippe Charbonnier)

Source: There is no more after… in Saint-Germain-des-Prés… (and no more before either!) – La République des livres