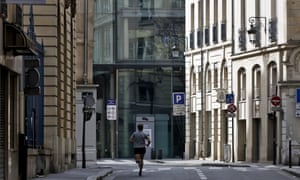 And suddenly, it was August. Grudgingly but obediently, the rue des Martyrs in Paris’s ninth arrondissement entered lockdown at midday on Tuesday, the few people on its pavements making their way home, baguettes and shopping bags in hand.

By 12.30pm, half an hour after France’s new reality – in essence, no going out unless to buy food or essentials, visit the doctor or get to a job certified as not doable from home – came into force, the normally bustling shopping street had emptied.

“It feels quite weird,” said François Cornet, 31, hurrying back to his nearby apartment with his partner, Suyaka Sudre, 29, and their seven-month-old son. “Though as long as we can shop for food, I guess we’ll manage.”

Sudre said the couple had debated long into the night, after President Emmanuel Macron on Monday evening announced the country’s toughest restrictions on public life outside wartime, whether to leave Paris and stay with relatives in the countryside.

“In the end, we decided we couldn’t,” she said. “None of them are getting any younger, and we didn’t feel we could take the risk of infecting them. So we’ve stayed. We’ll have to see how it goes. I don’t think it’s going to be much fun.”

France’s cafés, bars, restaurants and non-essential shops were ordered to close their doors at midnight on Saturday. On Monday night, Macron decreed the new measures, repeating six times during a sombre address – watched by a record 35 million people – that the country was “at war”.

Anyone flouting the restrictions, in place for at least the next two weeks, risks a fine of €38 to €135. “I know what I am asking of you is unprecedented, but the circumstances demand it,” Macron said. “The enemy is there: it is invisible, it is elusive, but it is making progress.”

The interior minister, Christophe Castaner, said 100,000 police officers would be deployed to enforce the lockdown, with checkpoints to be set up nationwide and anyone stopped outside their home asked to justify the reason why on a form downloaded from the interior ministry website.

The form, a legal document that can also be copied out by hand, requires any French resident who goes outside to declare, on their honour, that they have done so for one of a handful of permissible reasons – which also include walking the dog and “brief individual exercise, excluding team sports”.

The coronavirus has killed 148 people and infected more than 6,600 in France, numbers experts expect to rise sharply in the coming weeks. Macron said that if necessary, the government would legislate by decree to combat the continuing spread of the virus, but companies, jobs and households would all be protected.

Large numbers of Parisians rushed to railway stations or got in their cars on Tuesday morning to beat the noon deadline. “I’m not staying cooped up in a 50m2 flat with two children under 12 when we’ve got a family home with a garden and wifi 90 minutes’ drive away,” said Marc Becker, 49.

Loading his estate car with suitcases and shopping bags, Becker, a human resources manager for an engineering firm, said he would work from home and his wife, Anne, a secondary school teacher, had to give her lessons online anyway, since schools closed on Monday. “This is going to last weeks,” he said.

Those who stayed behind descended on the city’s groceries and supermarkets on Tuesday, clearing shelves of rice, pasta, tinned vegetables and long-life milk even though food stores, pharmacies and banks will stay open during the lockdown.

Outside the Carrefour on the rue de Maubeuge, a queue of shoppers, each standing carefully an arm’s length away from the next, waited patiently. “They’re letting us in five or 10 at a time,” said Marianne Garçon, 28. “I’ve been here for 25 minutes. If this is the new normal, I’m not sure how long Parisians will put up with it.”

Smaller food shops, their staff wearing face masks, were allowing only one or two people inside. A sign in the doorway of the baker’s on rue Condorcet read: “Yup, customers: please keep a safe distance, minimum one metre in the queue. Also, pay with contactless. We’re understaffed, so excuse us for the wait. But we keep smiling.”

On the rue des Martyrs, no one had yet bothered with the interior ministry’s form. But it was early days. “I reckon I’ll be all right,” said Yvonne Carmoins, 67. “I’ve got my shopping trolley, my dog and a prescription from the doctor. That’s at least three good reasons to be out. If they try and send me home, they’ll be getting an earful.”

Continue at The Guardian: France ‘at war’: how Parisians are coping with life under lockdown | World news | The Guardian