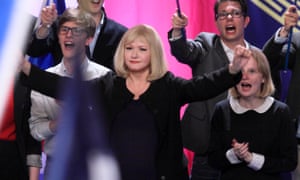 A film about the rise of far-right populism has triggered outrage in France after its trailer appeared to showcase a character based on Marine Le Pen, the president of the Front National and a candidate in France’s 2017 presidential election.

Chez Nous (AKA This Is Our Land) stars Émilie Duquenne as a nurse who becomes a political success in the Nord-Pas-de-Calais region after becoming involved with the Patriotic Bloc, a thinly disguised fictional version of the Front National. It is due for release in France on 22 February, two months before the first round of voting, and the trailer briefly features a character apparently modelled on Le Pen, played by veteran performer Catherine Jacob [ . . . ]