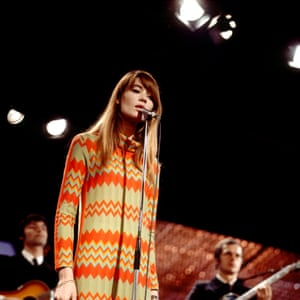 Françoise Hardy was the face of 1960s French pop, with the likes of Dylan and Jagger falling for her enigmatic allure. Now 74, the style icon talks about her new album and why she always sings from the heart

Hardy is reciting the first lines of Serge Gainsbourg’s song La Javanaise for my benefit. We are sitting at a small table in the middle of an otherwise empty room in a stylish Paris hotel. Eyes closed, her hand tracing a repeated arc in the air, she enunciates every word as if teaching a hapless pupil – “J’avoue j’en ai bavé, pas vous…” she intones softly, “Avant d’avoir eu vent de vous…”These seductive lines, she says, are the perfect example of the “sonority” of a song lyric, the elusive element she values above almost all else in her music. “For me, everything begins with the melody,” she says, growing animated. “Without the melody, there can be no words, but I also need this sonority, this poetic sound that the words make when they combine with the melody. This has always been my obsession. I know that I am very limited vocally, but I also know why I am still here – it is purely because I am so selective when finding the melodies.”

As the sad, sonorous songs on her new album, Personne d’Autre, attest, Françoise Hardy is very much still here. At 74, she occupies a singular place in pop culture, being both an enduring style icon – in January this year, Vogue celebrated her birthday with a feature entitled “10 style lessons to take from Françoise Hardy for the season ahead” – and a singer whose songs have lent themselves to constant re-evaluation by several generations of fans and critics alike. She has collaborated with Blur and Iggy Pop and has a fondness for the music of the Jesus and Mary Chain and cult Brooklyn band Cigarettes After Sex, whose sound, she says, “I have been looking for all my life”. She cites her 1971 album, La question, a collaboration with the late Brazilian musician Tuca, as her personal favourite of her own recordings, and it remains a classic among her fans for its lyrical sensuality and sophisticated arrangements. Her songs and her limited voice have taken her further than she ever expected to go, given that she was a somewhat reluctant pop star from the start, a singer who hated many of the early recordings that made her name [ . . . ]

Continu reading Source THE GUARDIAN: Françoise Hardy: ‘I sing about death in a symbolic, even positive way’ | Music | The Guardian