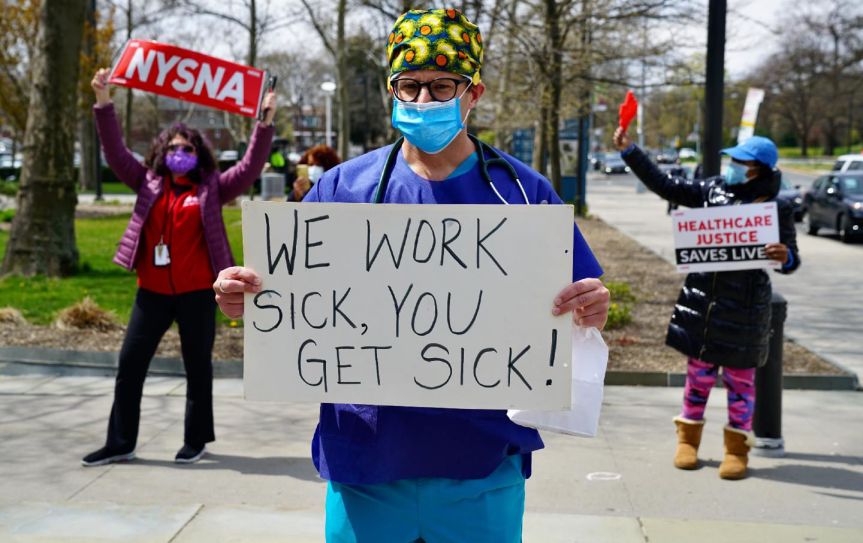 In the frantic scramble toward November 3, there’s a huge amount of Noise distorting the Signal. There are the flashback-inducing idiotic “lock her up!” chants at Trump rallies, this time aimed at Michigan Governor Gretchen Whitmer—who was recently the target of a kidnapping plot hatched by pro-Trump militia members. And there’s Trump’s chilling response, “Lock ’em all up,” the “all” presumably being everyone in the political arena who doesn’t fall into lockstep with Trump’s worldview. There’s Steve Bannon urging Trump’s “troops to back him up” and protect whatever “victory” an embattled No. 45 may try to declare before all the votes are counted. And there’s Rudy Giuliani, who continues to disseminate whatever propaganda tidbits the Russian intelligence agencies care to send his way.

Now, more than ever, it’s crucial to filter out all this Noise. For, if anything, the closer we get to the election, the faster the pace of real change in the political arena will be. The Trump administration is doubling down on its assault on America’s regulatory infrastructure. The New York Times recently reported on a crescendo of rules changes that lock into place weaker environmental, workplace safety, and transportation protections; that eviscerate labor standards; and that escalate Trump’s assault on the legal immigration process.

While it’s standard operating procedure for vulnerable incumbents to try to secure their agenda while they still can, this administration has taken that practice to an extreme. It is essentially bypassing the public-comments period required for major alterations to existing regulations and rapidly implementing fundamental regulatory changes without adequately studying their likely impact.

This isn’t just another power grab; it’s a seriously dangerous approach to public policy. For it breaks down existing protections—for example, on when dangerous liquefied natural gas can be transported through urban areas on the nation’s rail network—without putting in place properly thought-through safeguards in case things go wrong.

Not surprisingly, environmental groups as well as many state governments are horrified at this particular act of regulatory vandalism. Fifteen states have sued to block the rule change, and, in a separate lawsuit, several environmental groups have also taken on the administration.

On immigration, over the past few weeks, US Citizenship and Immigration Services has been quietly toughening up regulations on who qualifies for cultural visitor visas and whether holders of Temporary Protected Status can in any circumstances get an adjustment of status to put them on a path toward permanent residency. Perhaps most perniciously, it is putting into place far harder financial eligibility requirements for who can sponsor immigrants. This is in keeping with accelerated efforts in recent years to put in place de facto wealth tests for would-be immigrants. Collectively, these regulatory changes are rewriting American immigration law without Congress giving its imprimatur.

Meanwhile, attempts to use the Census to dilute the political and economic clout of immigrants continue apace. Shortly after the election, the Supreme Court will hear arguments on the administration’s efforts to factor out undocumented immigrants when calculating the apportionment of congressional districts, which will also affect the amount of economic assistance the federal government gives to counties and states. Since the court has already ruled that the Census cannot ask respondents about their legal status, it’s not clear how Team Trump intends to estimate these numbers; but what is clear is that, however they do so, this is a power grab intended to reduce the size of congressional delegations from California, New York, and several other big liberal states, and to limit the flow of federal dollars to immigrant-friendly parts of the country.

There are two weeks to go until Election Day, and it’s a fair bet that every one of those 14 days will feature Trumpian disinformation, misinformation, and one shameless power grab layered atop the next. There will be a whole lot of white noise out there too, largely intended to enrage, to push liberal buttons while camouflaging what’s really going on. Tune it out. Focus on the important stuff. And in your discussions with friends, family, and colleagues, make sure that they too filter out the distractions.

Person by person, vote by vote, state by state, it is time to put this great democracy back on its feet once again.

Sasha Abramsky, who writes regularly for The Nation, is the author of several books, including Inside Obama’s Brain, The American Way of Poverty, The House of 20,000 Books, Jumping at Shadows, and, most recently, Little Wonder: The Fabulous Story of Lottie Dod, the World’s First Female Sports Superstar. Subscribe to The Abramsky Report, a weekly, subscription-based political column, here.

Source: Trump Is Butchering Our Regulatory Infrastructure | The Nation