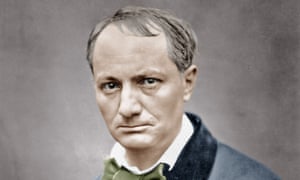 New lines to The Jewels, inscribed in a copy of Les Fleurs du Mal, has been unveiled as the volume comes up for auction

Baudelaire wrote the additional verse into a first edition of the book, sending it to his friend, the journalist and literary critic Gaston de Saint-Valry, as a “testimony of friendship”. According to auction house Drouot, the verse was only previously reported by Baudelaire expert Yves Le Dantec in 1928, who tried and failed to persuade the book’s former owners to make it public. Due for sale on 22 November, its estimated price is €60,000-€80,000 (£51,000-68,000).

“The verse added by the poet is completely unknown, and gives this copy a major literary importance,” writes Drouot in its catalogue.

“Et je fus plein alors de cette Vérité: / Que le meilleur trésor que Dieu garde au Génie / Est de connaître à fond la terrestre Beauté / Pour en faire jaillir le Rythme et l’harmonie,” wrote Baudelaire. The lines, which come after a verse in which Baudelaire’s naked lover is seen only in the light of the hearth, translate as: “And I was full then of this Truth: / That the greatest treasure reserved by God for the Genius / Is to know profoundly earthly Beauty / So that from there can spring forth Rhythm and harmony.”

Drouot’s Myrtille Dumonteil told France Info that “the writing has been authenticated and is the hand of Baudelaire. It y is the type of object that one always hopes to find in an estate.”

The lot will also include the 1928 letter from Le Dantec, in which he attempted to persuade the book’s previous owner to make the verse public. “I do not need to stress to you the primordial interest represented by this discovery of an original verse by the great poet,” writes Le Dantec. “I consider that there is no unpublished note, word, not even a letter from a man such as Baudelaire which should remain unknown, that everything concerning him is interesting. Far from devaluing such a treasure, the ‘disclosure’ could only increase its value – assuming that is the real reason for your negative response.”

Seen today as a classic of 19th-century poetry – TS Eliot called Baudelaire “the greatest exemplar in modern poetry in any language” – Les Fleurs du Mal’s reception in 1857 was far from welcoming. Linking sexuality, love and death, touching on lesbian love and the seamy side of urban life, one 1857 reviewer wrote: “Never has one seen so many breasts bitten or even chewed in so few pages.” Another in Le Figaro, denounced the collection’s “putridity”.