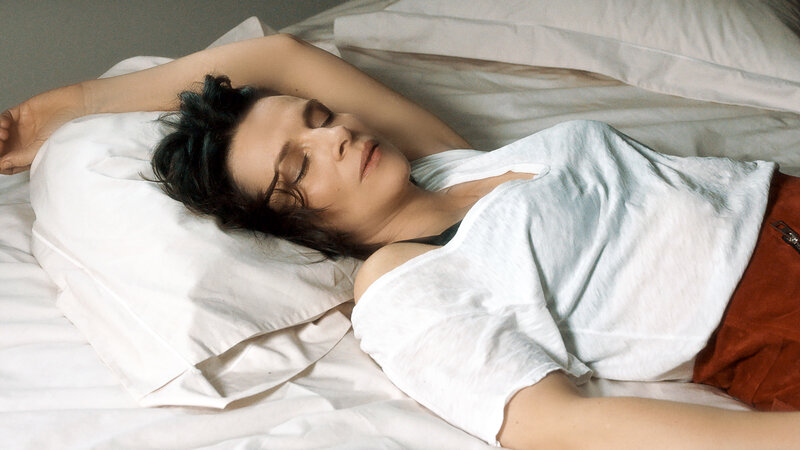 [ NPR ] Let the Sunshine In is the poorly translated title (more on that later) of the new film by French director Claire Denis. It opens with a scene that has launched many a tale of female romantic travail.

Isabelle, a Parisian painter played with characteristic heart and soul by Juliette Binoche, lies beneath her lover, waiting for him to achieve climax and to stop asking her, for heaven’s sake, if she’s there yet. With his own mission accomplished the lover, an oafish banker played to the nasty hilt by filmmaker Xavier Beauvois, wants to know if Isabelle has enjoyed more efficient orgasms with other men. She slaps his face and turns her back, then agrees to meet the oaf that weekend.

Needless to say he doesn’t show, and that will prove true of several other unsatisfactory, mostly married men who, one way or another, can’t or won’t give Isabelle the enduring love she seeks, yet won’t let her be either. A self-absorbed actor (Nicolas Duvauchelle) insists he’s leaving his wife but, having allowed Isabelle to inveigle him into staying the night, wallows in morning-after regret. There’s pain aplenty here, but though the movie runs up and down the mood register from hilarity to saxophone-fueled sadness to despair and back up to hard-won irony, the tone is never mawkish or self-pitying. If anything Denis, who co-wrote the wittily cascading — and, from time to time, coruscating — dialogue with the novelist Christine Angot, has cooked up a fresh sub-genre: the looking-for-love comedy procedural.

In another kind of movie Isabelle would bravely soldier on through cad after cad until Mr. Sensitively Woke makes his grand entrance and pouf! fin. Not here: Let the Sunshine In is the sum of its moments, of Isabelle’s inner and outer processing of her predicament with only hope to buoy her flagging spirits.

What energizes the movie and makes it delightful is that the guys are not all jerks, and that Isabelle is no picnic herself. Her needy insecurity renders her vulnerable and all too easily unsettled by facile judgments from others, which among other fruitful inquiries treats us to a very funny exchange with the great Josiane Balasko, who plays Isabelle’s powerhouse gallerist.

Teasing genre is not new for the bracingly innovative Denis, who has dabbled in horror (Trouble Every Day), though she’s famous for her political dramas (Beau Travail, White Material) set in Africa where she spent her childhood. Her next film, starring Robert Pattinson, will be set in space.

For a film that’s clearly meant to be experimental and fragmentary — it was worked up between other projects from Angot and Denis’s own histories, with the late French cultural theorist Roland Barthes poking his head in from a great distance — Let the Sunshine In moves between dialogue and carnal interludes with rhythmic fluidity. The mostly nocturnal settings and sumptuous black and red palette intensify Binoche’s soulful sensuality. Her eyes are black orbs of infinite depth, and she wears so many leather jackets and thigh-high boots that the filmmakers might be hearing from PETA, but those clothes exert a magical, if temporary hold on the men who love and leave her. “Take care of me a little bit,” she beseeches a man who manifestly takes care of nobody but himself.

What redeems Isabelle even as it gets her into hot water is her devastating candor with everyone, from the banker who envies her boho lifestyle yet constantly puts her down, to the stranger (Paul Blain) from the wrong side of the tracks who dances her into quiet ecstasy, to the cab driver about whose happiness she inquires at the end of a day that leaves her emotionally drained. She’s frank about herself too: Even her former husband (Laurent Grevill), with whom she has a child, gets roundly scolded when he makes a wrong move in bed. If Denis sometimes skates close to making a virtue of Isabelle’s honesty, it’s refreshing to hear such straight talk from a woman on screen.

Still, something has moved in Isabelle. Enter Gerard Depardieu, speaking words of wisdom and beauty. It’s not what you think, but his lovely speech about her predicament clues both Isabelle and us into acceptance of life’s enduring ambiguities. And then, he reminds her, there’s her work. Has Isabelle learned at last to let the sunshine in? According to the film’s French title, Un Beau Soleil Interieur (A Beautiful Sun Inside), which was inexplicably inverted for its stateside release, it was there in her heart all along.