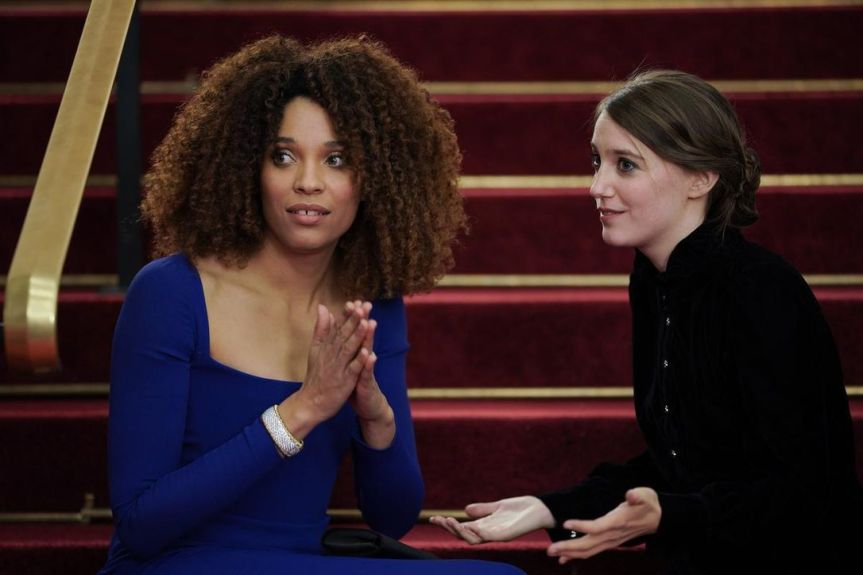 Wherever you live, there’s a Facebook mothers’ page. They are so geographically specific that you can belong to multiple pages at once — in my case that means the local village, the local town and of course the greater municipality.

Posts during the pandemic have been revealing: never have I seen so many desperate requests for recommendations about affordable printers and printer ink. My favourite lockdown post so far: “Can someone please get me excited about air fryers?”

But by far the most common COVID-19 post has been the request for new things to watch on Netflix. With so many of us at home day and night, we’re ripping through TV offerings like there’s no tomorrow. Because in many ways, as one day feels much like the next, there isn’t. Starting a new TV series is one way of charting some kind of progression through the stasis. So we ask for suggestions.

I’ll admit I was hesitant to try it at first because it’s French and … you know … subtitles. It’s that extra layer of neurological processing when my neurons are fully booked as it is. That stopped being a concern about five minutes into the first episode.

The show (called “Dix Pour Cent” in France) is about the people working at a Paris talent agency: the agents and their assistants are constantly scrambling to negotiate the vagaries and machinations of actors, directors, screenwriters and other agents, not to mention their own missteps and desires. It’s about many things but its particular genius is the way it depicts women.

Consider this: according to a 2015 study of 6,000 American actors, the women have slightly more roles than the men up until they turn 30, when things quickly and steadily decline. At their peak, the women average four roles per five years. For the men, their roles continue to increase until they’re 46 years old (an extra 16 years of career growth and maximized income), and their peak is five roles per five years. Men’s roles continue to outstrip women’s for 34 more years, until both reach 80 years old.

Even Sandra Bullock’s roles peaked at 29.

In stark contrast, “Call My Agent!” has six core female cast members whose average age is 47. Of the show’s 24 episodes, 12 feature real-life French actresses playing themselves in a guest starring role, and the average age of these 13 actresses is … 62.

Not only does the show promote the visibility of women at ages far beyond the average in the American entertainment industry, but its plots almost always wrestle with questions of female identity and representation. Will they be employable without cosmetic procedures? How much control do they have over their own representation? In what ways do their profession and/or celebrity status take away their chances for a “real” life? How does motherhood clash with the demands placed on actresses? How can they resist sexual harassment and sexualization and still reach their professional goals?

These are not the issues facing the male guest stars, and so the show not only prioritizes the visibility of actresses from their 30s right through to their 90s, but it illustrates the many challenges they face. The show demands we recognize how formidable these women are, given the obstacles put in front of them — obstacles the male stars don’t have to worry about.

The undeniable star of “Call My Agent!” is Camille Cottin (42); she plays agent Andréa Marteau (the common French word for hammer), who goes by the last name Martel (the little-used ancient French word for hammer). This double naming is metaphoric: while Andréa — a chic, tough-as-nails, sexually-liberated lesbian — seems to have escaped gender norms, she soon finds herself pregnant, then desperately trying to juggle motherhood and professional responsibilities. As her star rises at work, maternity drags her downwards with exhaustion and guilt. Though she may change her last name to something more rare, more fashionable, in the end she can’t escape the bourgeois reality of common usage.

However, it’s Liliane Rovère (88) who plays the narrative linchpin of the show: Arlette Azémar, the agent who ties all the characters together and acts as an even keel to balance the often frenetic action. Smoking cigarettes, always accompanied by her Jack Russell terrier, she is at once gritty and sensitive. She is caring and curt. She is unsentimental and nostalgic. She is funny and wise. The fact that such presence and complexity come from an actress almost 90 years old only strengthens the show’s insistence that women not disappear from the script at 30.

It says, again and again: “Look at what we’d be missing.”

Source: The most radical viewing on TV right now? ‘Call My Agent!’ | TheSpec.com