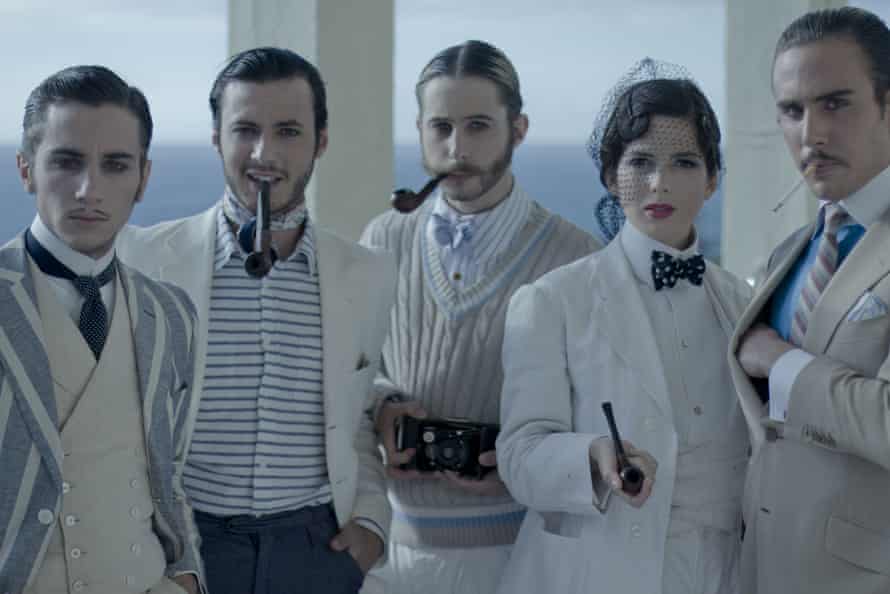 What do you do if you’ve got the tunes and the look, but can’t get gigs? France’s hottest band relive their ingenious $3,000 gamble

It’s hard to imagine a more French version of a rock’n’roll band than La Femme. For all that their second album, Mystère, one of the year’s best, is wholly accessible and dripping with fantastic tunes, it exudes a sense of cool that indie bands rarely manage any more. It tries on a wardrobe of different clothes – psychedelia, surf rock, electronica, krautrock and more – and ends up looking fantastic in all of them. It sounds chic.

It’s also made La Femme proper pop stars in France. As their manager guides me into a brasserie in Strasbourg–Saint-Denis, their home turf in Paris, he’s clutching a copy of Les Inrockuptibles, France’s leading pop culture magazine, to hand to the band’s masterminds, Marlon Magnée and Sacha Got. La Femme are on the cover, although there’s a certain amount of eyebrow-raising about the fact that the only person pictured is their singer, Clémence Quélennec. “It’s like a Vogue cover,” Magnée observes.

At this point, a boiling day in early September, the album has been out a few days, and is No 3 in the midweek charts. When the band’s tour reaches Paris in February, they say, they’ll be headlining the 6,300-capacity Zénith. Proper pop stars, you see. Their increasing popularity, though, has meant they’ve attracted some curious fans. Take George, who is in his 50s and has the words La Femme tattooed across his throat.

“He likes to smoke crazy weed and take a bunch of drugs,” says Magnée. “Before the show begins, he listens to the album and dances everywhere.” At which point Magnée – in so far as he can while cramped into a tiny booth in a crowded brasserie, with his lunch in front of him and a bottle of red on the table – mimes someone dancing in the manner of a deranged ostrich. “Sometimes I have to speak to him. ‘Look, George, I know you’re very happy to be here, but people think you’re weird. And if you’re too weird, they’re going to kick you out.’”

Keyboard-player Magnée and guitarist Got met at secondary school in Biarritz, near the Spanish border, where summer is alive with holidaymakers – and winter is dead. There’s little in the way of live music and nothing much else to do. “There are four bars at a junction where everyone goes to drink,” Magnée says. “But we don’t like it too much, because if you are dressed too rock’n’roll or too hipster or too trendy they call you a fag. So it’s a bit hard to grow up in Biarritz if you are really different.”

As soon as they could, the pair moved to Paris to dream up a band. Their first, the unpromisingly named SS Mademoiselle, collapsed because their singer only wanted to practise one day a week. And so they formed La Femme, a group that would be, as Magnée puts it: “Velvet Underground or Kraftwerk-style. Very mysterious.” They were listening to French underground from the 60s, and French synthwave from the 70s. They also knew their group had to look great. “We always said that if we had a band, it had to be fucking cool,” Magnée says.

Sound and look in place, there were only two problems remaining: nowhere to play, and no interest in them. They emailed 50 clubs in Paris asking for gigs, and got just two answers. At the first, the stage was so small the bass player had to stand at the back of the crowd with the sound engineer, plugged into the mixing desk. They had only eight songs and, because some of the crowd had turned up late, they went back to the beginning of the set when they had finished and just started over.

Then came the move that made them: a quite magnificent stunt that hoodwinked the entire French music industry. The band had recorded a one-off EP for a small label, and decided that going to America would make them famous. So they emailed 100 venues in the US, again asking for gigs. Again, only two people replied, but one of them offered to help out.

We went to US with $3,000 each and this girl found us 20 gigs,” Magnée says. “In France at the same moment, our EP was released. So the industry was like, ‘What the fuck? They have an EP out and they are touring in the US and we don’t know them?’ So the buzz began to start. When we came back to France, it was red carpet. Fucking DIY.”

They were duly signed to Universal’s French imprint, Barclay – former home to Charles Aznavour and Jacques Brel. Their debut album, Psycho Tropical Berlin, reached No 33 in France, and La Femme were on their way, taking any opportunity that came along – soundtracking Yves Saint Laurent’s catwalk show, performing at Austin Psych fest, in Texas, where Magnée looked like anything but a YSL muse.

“I was almost naked,” he says, “with a huge witch’s hat and a kimono.” Crikey. In Texas? Is he sure he didn’t look like a Ku Klux Klan recruit? He ponders for a moment. “No. I looked like Merlin. It was so magical. I was so happy. Like the sun – shining everywhere.”

Source: La Femme: the superchic French band who hoodwinked their way to the red carpet | Pop and rock | The Guardian