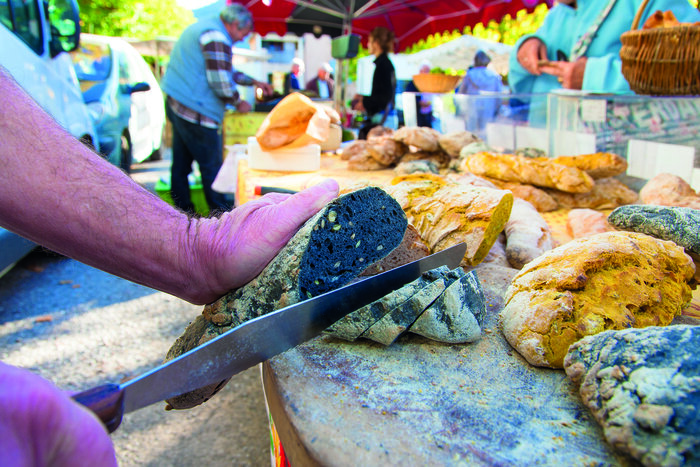 A local baker and a Michelin-starred chef have mastered the dark force of charcoal. Patrice Bertrand finds out more.

On a beautiful autumn morning, at the market in the picturesque spa village of Montbrun-les-Bains, in the Drôme Provençale, baker Norbert Jouveau cuts a few slices of a deep black-coloured bread in front of a group of intrigued onlookers. He hands out some slices to them, saying, “Taste this. It’s made with vegetable charcoal. It’s delicious and it’s good for your health.” At first sceptical, a woman tastes it, and then says: “It’s really good. I’ll take a loaf!”.

Eye of the Beholder

“It’s often like that,” jokes Norbert. “The visual effect is very important. Sometimes people are first repelled by the colour but when they taste the bread, they quickly change their mind. Charcoal is known for its many virtues: it reduces cholesterol, it regulates intestinal transit and balances kidney function. In addition, it’s good for the breath!” he says.

Norbert started making charcoal bread five years ago, in the tiny village of Curel, near Sisteron, where he also runs a guesthouse called L’Auberge du Vallon des Amoureux (The Lovers’ Valley Inn). “I was curious to use this ingredient,” he says. “I first tested it on myself and I realised that it was very effective for the gastric system. Then I started selling it.

“Of course, the charcoal I use is not the charcoal we use for grilling,” says Norbert, who makes about 30kg or a hundred loaves a week. “It is made from light wood, in my case poplar, which is purified, controlled and does not contain indigestible elements. I use 10g per kilo of flour and mix directly. This is enough to give the bread its black colour. Any less, it does not provide any benefit for digestion and, any more, we get a doughier bread that bakes quite poorly.”

Known since Antiquity for its purifying and digestive properties, vegetable charcoal has recently been making a real comeback in French bakeries, pizzerias and upscale restaurants.

Further north in the Alps, at Le Chabichou-Courchevel, an upmarket Relais & Châteaux resort in the Tarentaise Valley, vegetable charcoal is more about colour. With this ingredient, Stéphane Buron, the chef at its two Michelin-starred restaurant, creates dishes as delicious as they are spectacular-looking.

“In terms of taste, vegetable charcoal does nothing but, in cooking, I love everything that is monochrome,” he explains. “For example, it allows me to make black truffle tartlets with a thin and crispy charcoal dough. Or tricoloured ravioli of poultry liver, black trumpet mushroom tartlets with black jelly, smoked mozzarella with charcoal in the breadcrumbs.”

Added to this list are, among others, a puffed bread with vegetable charcoal, a fera (local lake fish) foam smoked with Ossetra caviar and black radish cream. The effect is stunning.

Stéphane Buron says: “I have been using charcoal for three years. Before, I used squid ink which has strong colouring power but coagulates and is sticky. However, vegetable charcoal is a completely dry ingredient. You can mix it with bread dough and get beautiful monochrome colours. The customers love it.”

Source: Back to Black: The Charcoal Trend in French Cooking