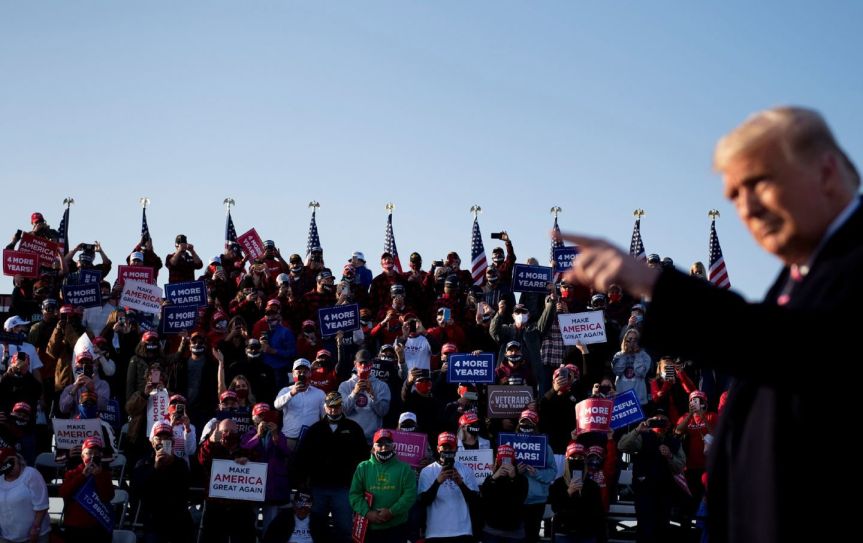 Shooting journalists, he says, is a “beautiful thing,” his fans have “good genes,” refugees are dangerous, and his political opponents should be prosecuted.

There is at times an extraordinary, almost deafening quality to silence; the absence of noise can be dignified and powerful. The jazz great Thelonious Monk once went so far as to claim that “the loudest noise in the world is silence.”

In that silence, that Signal, one often hears the rhythms of introspection; the timbre of careful thought and logic, the teasing out of ideas. Inside that silence, if one is thinking about a person recently deceased, one can ponder the philosophical, moral, spiritual, and intellectual values they embodied.

This is what the Ruth Bader Ginsburg vigils were like around the country: silent, calm, sorrowful affairs over which the jurist’s legacy hung, so omnipresent that it needed no amplification. I attended the one in Sacramento on Saturday night; hundreds of people, holding candles, walked quietly and mournfully around the perimeter of the capitol. There were similar events all over the country.

Imagine, by contrast, what a vigil for Donald Trump will look and sound like when he dies. It’s difficult to imagine that it will be calm or quiet, that it will be a time to ponder the caliber of his ideas or his humanity. Any silence at that moment would be a vacuum-like quiet, an absence of introspection, a void, rather than a seedbed of moral contemplation. Far more likely that his wake would be a rowdy, yahoo-esque affair, an excuse for bile and bigotry to flare up with wretched, final abandon. For there is no dignity in Trump, and no matter how much he craves the love of the crowd, there will be no dignity when pondering his absence.

Talking of dignity and its lack, consider for a moment the toxic stream of consciousness that passed for a Trump campaign speech in Minnesota this weekend.

Now, I have no desire to amplify the man’s Noise needlessly, but given that he is hard at work pressuring the GOP-controlled Senate to barrel ahead in confirming a Supreme Court justice, and given that Ted Cruz made the reasoning for such haste shockingly and shamelessly clear on Fox News (that they expect to take legal battles surrounding the election results up to the Supreme Court, and Cruz doesn’t want to risk a 4-4 split verdict), it’s worth pondering for a second the programmatic fascism at the core of Trump’s Minnesota message: The police shooting by rubber bullet of a journalist reporting on protests against police violence is “the most beautiful thing” and helps enforce “law and order.” Refugees are bad, and his overwhelming white audience there has “good genes” (and, while we’re at it, Confederate military commander Robert E. Lee merits a whole heap of praise and respect). And political opponents ought to be arrested and prosecuted—not for particular crimes, since he listed none that the ones he named (Representatives Alexandria Ocasio-Cortez, Ilhan Omar, and Rashida Tlaib) might be guilty of, but simply because he doesn’t like them.

Presumably that same rationale—that all is fair in elections and war, and that you’re either with Trump or you’re the enemy—was used by Trump supporters in Fairfax, Va., over the weekend, when they came out to harass early voters. They did this so aggressively and so overtly that county election officials had to escort voters inside to cast their ballots, much as escorts have, for decades now, had to shepherd women through lines of screaming, sometimes violent anti-abortion protesters outside Planned Parenthood and other offices that provide abortion access. This from supporters of the self-proclaimed “law-and-order president,” who has spent weeks proclaiming his worries about electoral malpractice by his opponents.

Add to that Trump’s proposed “1776 commission” to determine “patriotic”—read propagandistic right-wing—schooling for kids, and his statement about channeling $5 billion from the forced TikTok sale toward this agenda. And then factor in the extraordinary Health and Human Services memo from last week, which removed huge regulatory powers over medicines, vaccines, food safety, and so on from career scientists at the FDA and placed them with the Health and Human Services secretary.

Add it all up, and you have a fairly good schema for what a Trump second term would look like: intimidating; violent; conspiracist in temperament and act; reliant on a combination of street-fighting and hyper-conservative judicial rulings infringing upon one right after another; and utterly unfettered by the advice of scientists, willing to bend any and all scientific norms to get Trump’s way on issues surrounding pandemic response, climate change, and other crises on which the public needs informed expert advice.

Oh, and don’t forget the accelerating personal corruption: Vanity Fair this week reported on the numerous overseas governments and lobby groups now renting space, via shell companies, in Trump properties—not because they need the space, but because those investments are expected to lubricate access to Trump officials and thus help set administration policy and economic and military priorities. This must surely be the most extreme pay-to-play scam in US political history. It makes the Teapot Dome scandal look benign, and Tammany Hall like a model of good governance.

In 2016, at least, the GOP had a policy platform of sorts. This time around, with participants in their convention having sworn to support whatever Trump decides to promote, the party’s election package has dispensed with all trappings of democracy. From trying to ram through the confirmation of another Supreme Court justice days before the November ballot to unleashing harassment teams against voters in areas that skew Democrat, it’s all about power and personal aggrandizement.

Source: Fascism Is the Core of Trump’s Message | The Nation