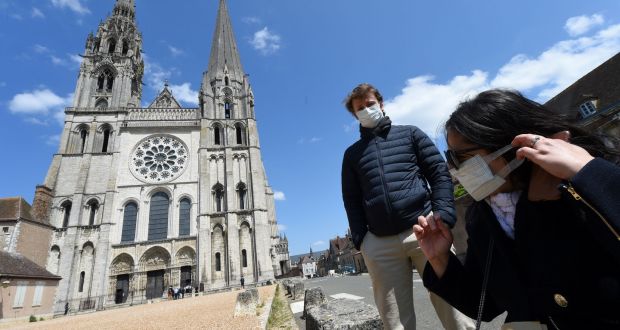 As the cathedral in Chartres reopens, sacred and profane struggle with Covid-19 constraints

The French poet Charles Péguy described Our Lady of Chartres as a star of the sea, rising above oceans of wheatfields on the plains of La Beauce.

It is more prosaic to approach the Gothic masterpiece from the autoroute, but its majesty is nonetheless stunning.

I visited Chartres because it falls within the 100km “perimeter of liberty” accessible to Parisians under Covid-19 regulations.

The cathedral’s website announced that it would reopen to visitors on the afternoon of May 14th. They would be required to wear masks. Fifty could enter at a time, if they observed social distancing.

The rules changed overnight. The prefecture, the arm of the interior ministry which is responsible for religious affairs, grew alarmed at the prospect of Parisians flocking to the beauty spot 86km to the southwest of the capital.

“This is the contradiction we’ve been living with since the beginning of the epidemic,” Fr Emmanuel Blondeau (56), the rector and parish priest, said. “The state says: ‘Stay at home but go to work. We’re lifting the lockdown but don’t move. Don’t go to Chartres, which is the most beautiful town in France.’”

They don’t understand what Mass means to Christians. They think it doesn’t matter, but it matters to us

Instead of 50 people, only 10 visitors are allowed to enter the sanctuary at a time.

“The cathedral is open only for personal prayer, and for residents of Chartres,” a staff member admonishes visitors in the queue. Some drift away dejectedly. A flacon of hand sanitiser and an offering plate await those who persevere.  Under lockdown, “There has been an explosion of digital life in the parish,” Fr Blondeau says. “Things we never imagined. We didn’t even have a newsletter. We’d never had a televised Mass before. We created a YouTube channel.”

The cathedral has broadcast Mass live every Sunday since mid-March. In normal times, up to 1,500 attend services. Now 2,000 click on the parish website, and several are presumably watching in many households. The videos are also available on demand from France’s main telecoms operators.

Fr Blondeau estimates up to 20,000 people are watching, and he’s thrilled by the surge in his ratings. “Eighty people used to attend morning Mass on weekdays. From the feedback I get, I think about 1,000 listen on radio.”

But relations between church and state have hit a low point. When prime minister Édouard Philippe announced the partial lifting of the lockdown, he banned religious ceremonies at least until June 2nd.

“They don’t understand what Mass means to Christians,” Fr Blondeau says. “They think it doesn’t matter, but it matters to us. Parishioners are deeply wounded by the lack of freedom. They feel disrespected.”

Source: Lockdown works in mysterious ways in ‘the most beautiful town in France’