The virus doesn’t care who you voted for: Stop being a dick

Apparently, some of you assholes need some tough love right about now and I’m just the bitch to give it to you so sit down, shut up, and listen.

I’ll apologize upfront for all the swears you’re about to read, but I’ve had it up to :jumps to the International Space Station and back: here with you fucking people and I guarantee, at least one of you assholes needs to hear this. And if you aren’t the asshole that needs to hear it, you definitely know at least one who does. 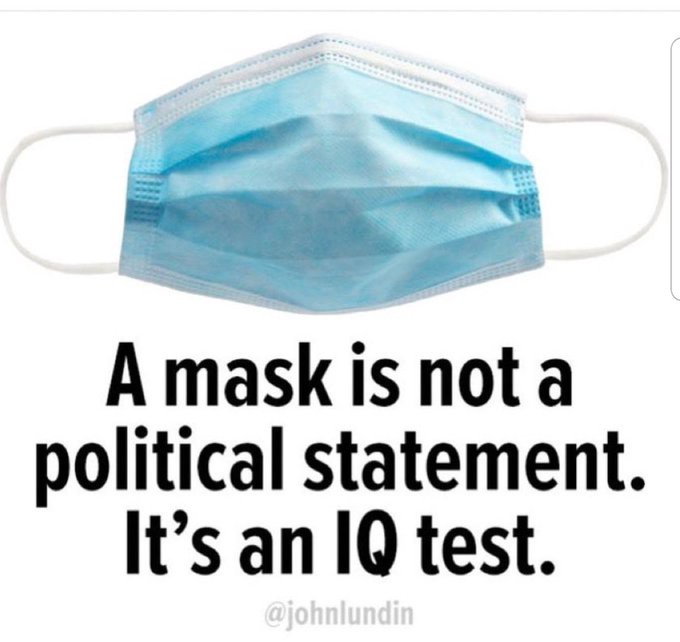 Apparently, some of you assholes need some tough love right about now and I’m just the bitch to give it to you so sit down, shut up, and listen.

I’m begging you: wear a fucking mask when you go out in public. When I say “mask”, I mean face covering of some sort. A scarf, a bandana…a bra. Whatever it takes, just cover your fucking face.

On Saturday, my husband stopped at the grocery on his way home from treating COVID19 positive patients in the ICU. Other than the employees and him, *not one other person* was wearing a mask.

Why are you people this way?

Listen, morons, you are putting the employees of the store, not to mention their families and friends, at risk. You know, those front-line workers everyone says they appreciate but YOU apparently don’t really give a fuck about?

For the sake of argument, let’s put aside the fact that there is absolutely no word you can put in that space to make that sentence make sense. You aren’t wearing a mask to protect *you*, dumbass. You are supposed to be wearing it to protect *them*.

When you don’t wear a mask, you are telling front-line workers and other shoppers that you think their lives matter less than the milk you stopped in for. If that’s what you think, then, by all means, continue being an asshole, I guess.

:FACEPALM: Not sure if you’ve watched the news these past few weeks, (LOL of course you have), but you wouldn’t necessarily know if you were infected or not. You could be an asymptomatic spreader. One asymptomatic spreader can spread Covid-19 to 9,537 patients in 40 days.

Yes, bitch. You can infect almost 10k people. If the mortality rate is .5%, that means that one of every 200 people you infect will die.

That’s 50 people you will be responsible for killing, you unbelievable moron.

WHICH IS WHY YOU SHOULD BE WEARING A FUCKING MASK.

Today in Washington state, our rate of infection, or R0, is 1.1. That means if you have the virus, you are infecting more than 1 person. That’s not good. In fact, most experts recommend an infection rate of less than 1.0 for two weeks before starting to re-open.

No, dumbass. Because at the end of April, it was .92. It shouldn’t be going up. It should be going down.

This means that you people aren’t wearing your fucking masks and I don’t fucking understand why.

IT IS NOT HARD JUST WEAR THE FUCKING THING

Look you dicks, when the virus hit and the hospitals started to become too busy for the critical care doctors to handle, my husband left his medical practice to help out in the ICU. He didn’t have to. He could have just stayed at home and done telehealth, but he felt compelled to help out. He’s not alone. Thousands and thousands of medical professionals all over this country dropped everything and came running because they thought that by flattening the curve, lives could be saved and society could start reopening more quickly. Over 1,000 healthcare workers have died from COVID-19 so far.

The LEAST you can do is cover your damn face with a fucking mask so you don’t end up killing people.

One thought on “ICU hero’s wife offers profanity-laced, hilarious and heartbreaking plea to mask opponents that will have you cheering”