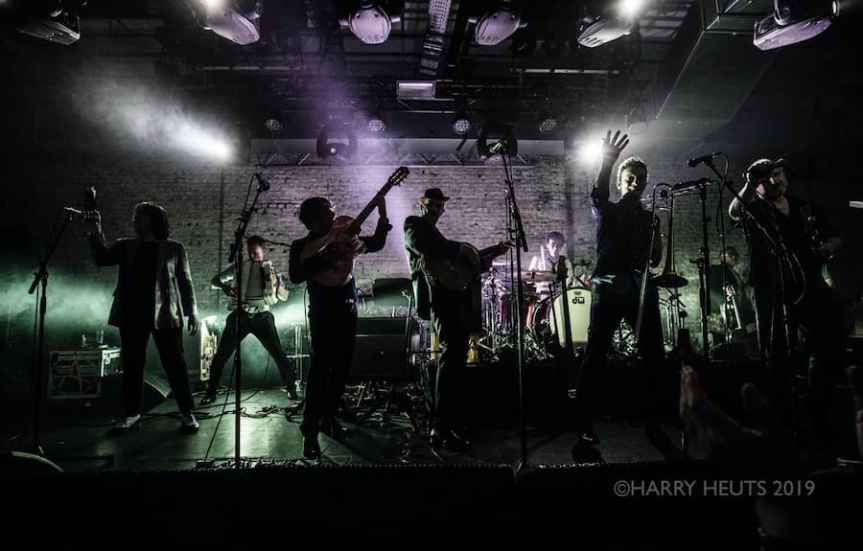 “Last time we’d played together was for an MTV show in Paris in November 2001,” Stéfane explains. “Then we decided to stop for a while; we didn’t know the pause was going to be so long, but with the death of our manager Jacques Renault in 2004 everybody started to make his own way solo. We decided to be back together in order to celebrate thirty years of Mlah. We did our first gig in front of friends in a small venue in Banlieue de Paris called Le Blanc Mesnil and the response was incredible. We saw on their faces that everybody was waiting for that, including us! Since then it’s really enjoyable to be back and playing.”

The members of the band first met on the alternative scene in early-80s Paris, playing in various bands, before coming together as Les Négresses Vertes in ’87. By their own admission, they weren’t great musicians but improved immeasurably during their first tour.

“Our inspiration came from the fact that we had different influences coming from our youth and everybody was writing too, so that gave the band not only one way of inspiration.”

Those influences cover a lot of ground – Mathias Canavese’s accordion gave them there Frenchness, while Matthieu Paulus’s trombone, and songs like ‘La Danse des Négresses Vertes’ underlined a ska influence. Elsewhere one could detect sounds leaning towards skiffle, funk, North African rai and Greek rebetiko. Such bands weren’t entirely unprecedented though: along with The Pogues, the UK had also seen the rise of bands like The Cropdusters, The Forest Hillbillies, The Boothill Foottappers and Sons Of The Desert, who would support Les Négresses Vertes when the crossed The Channel.

Setting themselves apart from the outset, the band recorded ‘200 Ans D’Hypocrisie’ a galloping response to their homeland’s celebration of the 200th Anniversary of the Revolution. Stéfane maintains, however, that they were never a political band…

“We are musicians, not political. ‘200 Ans…’ talks about the way of after the Revolution nothing has changed. Privileges are still there, money rules the world. We are talking in our songs about our lives; short stories talking about people we know, we meet and sometimes that give to the song a political relief, but we’re not fans of a special political… We feel like Anarchists.”

Mlah was recorded in 1988 with British producer Clive Martin. At that time relatively unknown, Martin would earn a reputation working with indie-rock bands like Reef, Echobelly and Puressence, but during that period he would bond with the band, being recalled by them for their second album Famille Nombreuse in 1991. Stéfane recalls the recording of Mlah fondly…

“When I look back to this period, I remember that it was very rough, wild and done with no concessions. Not one of us knew the Mlah album was gonna be a classic; we just did it, in one month, including the mix, and it was such an experience to discover that we were able to do it.”

The band’s path to success, though, would be derailed when Helno, already struggling with addiction problems, died from an overdose of heroin in January ’93. How difficult was it for the band to continue?

“When your singer and friend died at twenty-nine years old, it’s more than difficult; it’s an injustice… Helno was the frontman but Les Négresses Vertes was a real band. So we didn’t replace him, we just decided to go on and share the mic and the writing as it was before.”

So while some members, including Mathieu Paulus, left the band at this point, Stéfane and wife Iza Mellino (vocals/percussion) remained, along with Canavese, bassist Jean-Marie ‘Paulo’ Paulus and trumpeter Mich Ochowiak. An album of remixes – by the likes of Norman Cook, Massive Attack and Gangstarr) – signalled the band’s rebirth before they made an emotional return to the UK with an October ‘94 show at the bijou and appropriately ornate Café de Paris off London’s Leicester Square.

The band also released a new album proper, Zig-Zague, that year, followed by the double-live album Green Bus two years later, which went some way to capturing the vivacious Les Négresses Vertes live experience. After collaborating with Natacha Atlas on the single ‘L’Egyptienne’, they delivered a further new album, Trabendo, recorded with Björk, U2 and Everything But The Girl producer Howie B. Incorporating lounge and dub influences, with a prolific use of programming, the sound is a long way from the boisterous Mlah by some distance but proves, if nothing else, that Les Négresses Vertes had not failed to move with the times.

“That’s true that we didn’t want to be prisoners of one style,” agrees Stéfane. “That’s why we did 10 Remixes in ‘93 and Trabendo in ‘99, meeting different producers and experimenting with them. They have changed the sound but the spirit was still the same, a way of writing, as I told before, connected to our lives and experiences.”

Before the band closed the door on this chapter, they released the vaguely unplugged album Acoustic Clubbing, including pared-down songs from their back catalogue, along with a cover of Jimmy ‘Bo’ Horne’s disco staple ‘Spank’. In the ensuing years, Stéfane and Iza would hed out as Mellino, delivering four albums and playing more than six-hundred shows; Paulo formed the band Le Retif before throwing in his lot with the Zingaro Equestrian Theatre; Mich Ochowiak made a name for himself as composer for film and theatre.

All of those came on board for the reunion seventeen years later. Sadly, though, accordionist Mathias Canavese felt unable to participate.

“Mathias didn’t come back with the band after all these years,” explains Stéfane. “He bought an hotel in the French Alps and changed his way of life.”

One piece of good news was the return of trombonist Matthieu Paulus, such an integral part of the original line-up. François Cizzko Tousch, meanwhile, has taken Canavese’s place, doubling up on keyboards, while noted session-man Matthieu Rabaté occupies the drumstool. Typically of these straitened times, it’s a slightly slimmed down version than the ten-piece band of three decades ago, but judging by their performances on this tour, time has not taken its toll on their energy or enthusiasm. So what’s next for the band? A new album maybe?

“At the moment we’re preparing a live album and a documentary talking about this comeback. You know, music has changed and people now are not consuming music the way it was thirty years before. Why bother doing an album that nobody wants to buy? Of course, as musicians we’re still waiting for inspiration… Wait and see!”